VCCEdge has released its Monthly Deal Update for April 2012.

- Private equity investments in India in April 2012 were recorded at $532 million spread across 49 deals, less than half of the $1.22 billion worth of investments from 53 deals recorded in April 2011.

- Big-ticket deals ($100m and above) accounted for 20.68% of the total capital invested during the month.

- Private Equity Exits in terms of exit value increased 12.5% and deal volume dipped by over 61% as compared to April last year.

- Compared to the same period last year, deal values dipped by a significant 39% and 68% across domestic and outbound deals, respectively.

- The Median deal size decreased from $19 million to $10 million while the average deal size went down from $69 million to $62 million during the same period.

- Big ticket deals ($100 million and above) continued their dominance accounting for 80.78% of the total disclosed M&A deal value in the month. 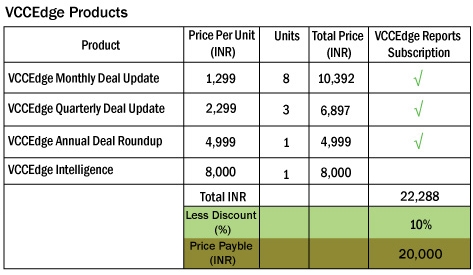