As many as 46 founders from 26 unicorns including Byju Raveendran, Zoho’s Sridhar Vembu and BharatPe’s Shashvat Nakrani found themselves among the 100 wealthiest Indians this year, going by IIFL Wealth Hurun India Rich List.

The list was topped by Mukesh Ambani, chairman and owner of Reliance Industries.

Raveendran and family’s wealth stood at Rs 24,300 crore, making them the 67th richest. The wealth of the family has grown 19% this year. 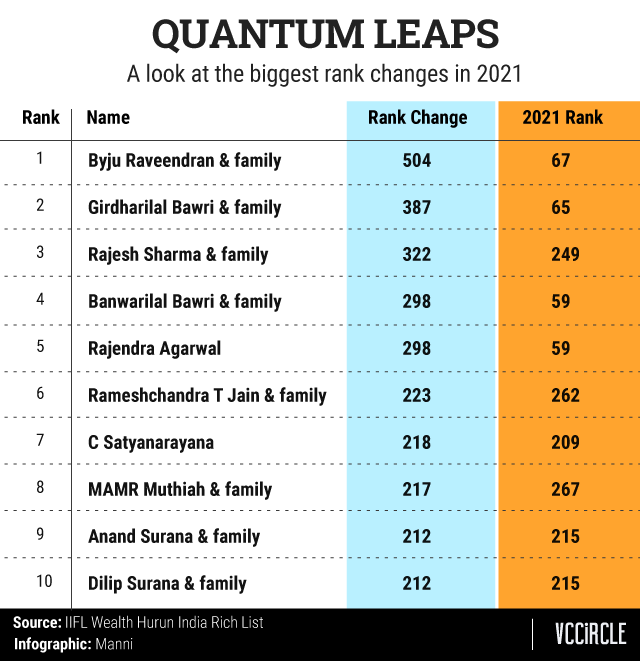 With Rs 5.05 lakh crore, Gautam Adani and family moved up two places to the second spot. The Adani group has a combined market capitalisation of Rs 9 trillion and, except Adani Power, all listed companies are valued at more than Rs 1 lakh crore.

"Gautam Adani is the only Indian to build not one, but five Rs 1 lakh crore companies," said Anas Rahman Junaid, MD and chief researcher, Hurun India.

Confluent co-founder Neha Narkhede is the youngest self-made women entrepreneur in India on the list this year.

With a total of 45 individuals including 10 new additions and 2 dropouts, financial services had a good year. The sector witnessed a 55% increase in wealth compared to 11% in 2020. 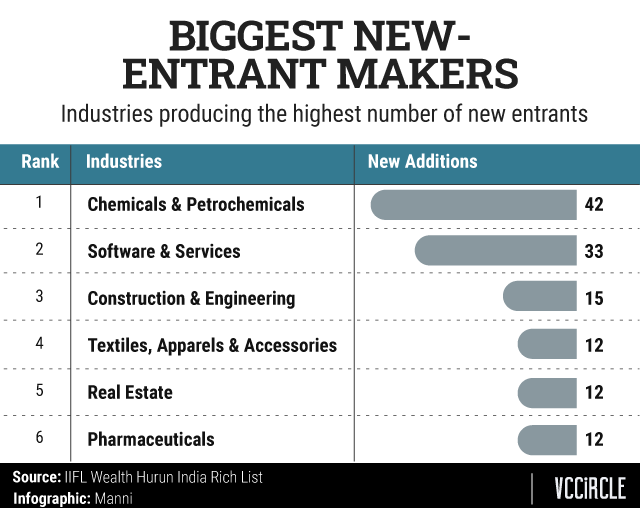 BillDesk co-founders MN Srinivasu, Ajay Kaushal, and Karthik Ganapathy are the biggest gainers from the financial services industry backed by the proposed Rs 35,000 crore all-cash deal by Prosus and Naspers to acquire BillDesk.

India has over 237 billionaires, up 58 compared to last year. "Today, India has 237 billionaires, more than quadruple that of 10 years ago, and the second-fastest growth in the world after China, according to the Hurun Global Rich List 2021,” Junaid said. He added a record 659 entrepreneurs or 66% are self-made, up from 530 last year.

With 40 entrepreneurs, the pharma sector minted the highest number of billionaires this year followed by chemical and petrochemicals (27) and software (22).