Tracing the volatile highs and lows of cryptocurrency

Bitcoin and other cryptocurrencies have grabbed headlines over the last year. Bitcoin, the most popular digital currency, jumped from $800 on 1 January 2017 to over $19,000 in mid-December 2017. The digital currency and other decentralised cryptocurrencies allow people to trade directly with each other, cutting out the need for a middleman, which in the case of traditional commerce, is usually a bank.

The market capitalisation of the combined cryptocurrency markets had exceeded that of the second largest global company, Google. There are more than 100 cryptocurrencies and among them, many will survive and a lot might just disappear.

Limited supply, positive perception of its value by the public, skyrocketing price trends and huge interest in the media and investors have been the most critical driving factors behind the boom of cryptocurrencies. Most importantly, the listing of cryptocurrencies on many new exchanges in the US, UK, China, Denmark and South Korea infused faith among investors. As demand for the cryptocurrencies increased, it grabbed media attention and investors began pouring money in them, which shot up the prices. Investors, particularly in China, South Korea and Japan, began to trade as a way to make a quick buck.

Currently, the sell order exceeds the number of purchase orders for most cryptocurrencies resulting in a downfall of the digital coins. Bitcoin has also been a cause of concern as it can be misused for a range of serious crimes because of the anonymity it offers. Some terrorist organisations are using cryptocurrencies to fund their activities by operating anonymous wallet IDs.

Of late, the conversation around regulating digital coins and using Bitcoins for hacking has created a negative perception of the currency, which has led many stakeholders to crack down on it. Many banks have banned cryptocurrency purchases on their credit cards and have stopped taking deposits from crypto wallets. Several countries have now debarred cryptocurrency activities as digital currencies can be used to move illegal money out of the country. Recently, China prohibited all cryptocurrency trading and blocked access to websites based overseas using its ‘Great Firewall’. South Korea said it will regulate the use of cryptocurrencies in the country.

Indian crypto trading sites have also started to verify and authenticate their user base by making Aadhaar information mandatory while registration. Even Finance Minister Arun Jaitley, while presenting the Union Budget 2018, said that while the Indian government favours blockchain, it does not consider cryptocurrencies as a legal tender. A month after the union budget, Indian crypto token marketplace BTCXIndia and ETHEXIndia announced that they were halting cryptocurrency trading from 5 March 2018.

Moreover, the Indian government will introduce a framework to regulate cryptocurrencies. Fabricated news and inaccurate information began to spread after the finance minister made a statement in the union budget around cryptocurrencies. This created negative sentiments among many Indian investors, which caused them to pull out their money. Since Twitter is the place where news breaks first, a sentiment analysis of data and hashtags from the microblogging platform show that there is a correlation between negative sentiments and the downfall of digital coins.

The surge in cryptocurrency trading volumes in December 2017 was natural because traders recklessly invested using leverage. As it was a roaring market, many newbies entered to make fast money. A combination of these variables led to a spike in volume. When prices fell, most newbies were stuck with their positions because they rarely used a stop loss. Many would have also bought digital currencies in a falling market, thus exhausting their purchasing power. Their only option was to hold until the market recovered. This portion of the volume will not return until the price reaches the December 2017 highs. On the other hand, cautious traders also don’t venture in a falling market because it is always better to trade in a market that shows a clear up-trend. All these reasons combined have led to falling volumes.

As per a recent development, Google will ban online advertisements promoting cryptocurrencies and initial coin offerings starting in June 2018. This is part of a broader crackdown on marketing a new breed of high-risk financial products.

Price range of the top cryptocurrencies 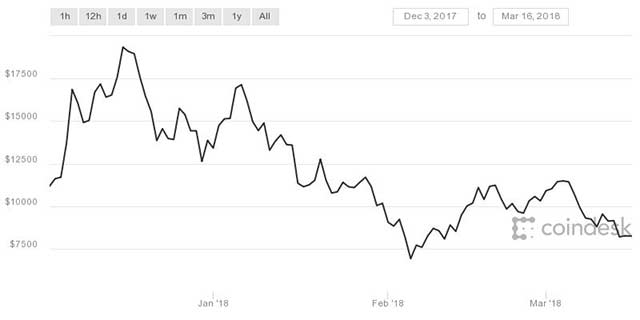 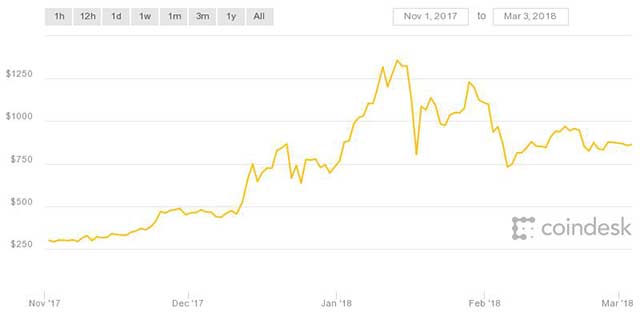 Ripple: The price of ripple was around $0.25 in November 2017 and then it suddenly jumped above $1 in December 2017, a 300% increase. Later it surged further to above $3, marking a 1,100% increase rate within two months. Currently, it is again below $1, reflecting high volatility. Currently, the demand for Ripple is decreasing, which has caused its price to fall. 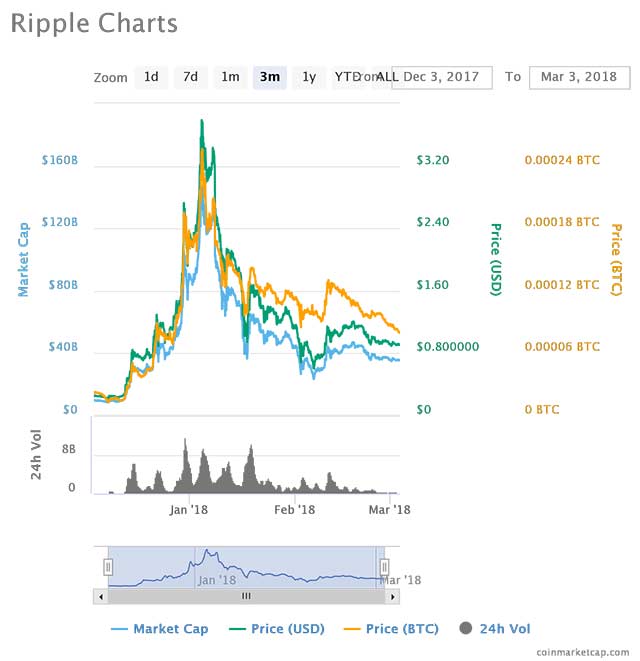 The road ahead for cyrptocurrencies

Cryptocurrencies can become a true rival to the current traditional currency system, but has significant obstacles to overcome. Money in the form of cryptocurrencies cannot be traced and can be easily used for illegal activities. As speculated for long, the cryptocurrency bubble has burst for now and even if they rise again, it would be on more solid foundation and not so much on hype or hope around them. The future of cryptocurrencies continues to remain uncertain.