Barely a month-and-a-half after selling their online taxi aggregator TaxiForSure to larger rival Ola, its co-founders Raghunandan G and Aprameya Radhakrishna have left the company. Radhakrishna confirmed the move to VCCircle and said Thursday, April 16, was their last day at the firm.

Arvind Singhal, who was COO of TaxiForSure at the time of acquisition, had become CEO while Raghunandan and Radhakrishna moved to advisory roles. At that time, it was disclosed that both would continue with the company for a certain period but did not specify the duration.

Radhakrishna did not reveal what he plans to do next, saying it was too early to decide about the next move while Raghunandan was not immediately available for a comment.

The two co-founders now own 0.8 per cent stake in Ola which is currently worth just over $19 million (around Rs 120 crore), as per VCCircle estimates.

Ola spokesperson did not immediately offer a comment on the development. 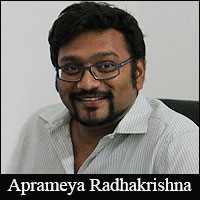 Founded in a 100-square foot office in Bangalore in 2011 by IIM-Ahmedabad alumni Raghunandan and Radhakrishna, TaxiForSure facilitated some five million cab rides for users over the last four years before being acquired by Ola for $200 million (Rs 1,250 crore) in what was largely a stock transaction, on March 2.

Ola sealed a large $210 million funding round led by SoftBank creating a large corpus to fight not just global rival Uber but also local peers Meru and TaxiForSure among others, last October.

TaxiForSure was also in talks for a large funding but the sexual assault by a driver on Uber's network in Delhi caused a regulatory flux which scuppered its fundraising plans. Post that it accepted the offer by Ola in what was then the second-largest acquisition deal in the internet business in India (with Snapdeal buying FreeCharge, Ola-TaxiForSure transaction is now the third biggest, behind Flipkart's Myntra buy).

Under Ola, TaxiForSure continues to operate as a separate entity at least for now. The two are similar at the front end for the consumer but have different back-end business models. While Ola has a driver-centric business where it brings individual driver owners of cabs to its network, TaxiForSure has an operator-centric model where it ties with cab operators with a fleet of cars in the network. Both also offer auto-rickshaw booking.

Ola recently also launched a local food ordering and delivery service where it uses cabs who are not ferrying passengers to deliver food ordered by its users from local restaurants. It is also said to be working to extend this service to offer grocery deliveries.

The acquisition of TaxiForSure allowed Ola to build a significant lead over Uber. Ola has just raised $400 million in a new round led by DST Global, taking its valuation to $2.4 billion.