Stage set for infrastructure push in the Union Budget
Advertisement

Stage set for infrastructure push in the Union Budget

The Economic Survey 2016, tabled in Parliament by finance minister Arun Jaitley on Friday, emphasized that there is a need to push for higher public spending to bridge India’s infrastructure gap.

“Public investment may need to be increased further to address a pressing backlog of infrastructure needs,” noted the Survey prepared by Arvind Subramanian, the chief economic adviser (CEA) to the government of India.

“Such an increase would merely return spending to its 2010-11 level of around 2% of GDP (gross domestic product), well below the level in other emerging markets,” the Survey added.

The paper on India’s economic performance, however, noted that an economy like India whose exports have fallen due to weak global demand and which is hit by weak private investment, it is performing remarkably well. A part of this can be attributed to large public investment programme to support infrastructure.

“Its (India’s) economic growth is amongst the highest in the world, helped by a reorientation of government spending toward needed public infrastructure. These achievements are remarkable not least because they have been accomplished in the face of global headwinds and a second successive season of poor rainfall,” noted the Survey.

Addressing a press conference in New Delhi on Friday, Subramanian said, “The world economy is becoming grim and I can’t think of a moment in the last 25-30 years when there has been such a unique cocktail of pervasive vulnerability in the world.” He added that growth in advanced economies is faltering and that is reflected in the stock prices in those economies.

Subramanian also said that China, Brazil, Russia and all oil exporting countries such as Saudi Arabia are under considerable stress.

The CEA expects that the government will be able to achieve its fiscal deficit target of 3.9% for the year 2015-16. This, however, is contrary to his earlier views expressed in the mid-year economic analysis in 2015. Subramanian had then questioned the logic of sticking to the target, given that an early recovery of the economy would require higher public spending in the backdrop of tepid private sector participation.

Experts concur with the change in approach.

“The mid-term economic review had indicated that the medium-term fiscal framework could be relaxed to boost public spending. However, the economic survey has prompted the government to stick to the target of 3.5% (for 2016-17), in order to maintain credibility. It is important to maintain the fiscal deficit target as this would create more space for monetary policy to stimulate growth,” said Richard Rekhy, chief executive officer, KPMG in India.

According to the survey, various initiatives have been taken in the infrastructure space in sectors such as power, road, railways, civil aviation, ports and telecommunication. As a result, all these sectors have performed better during 2014-15 compared with 2013-14. 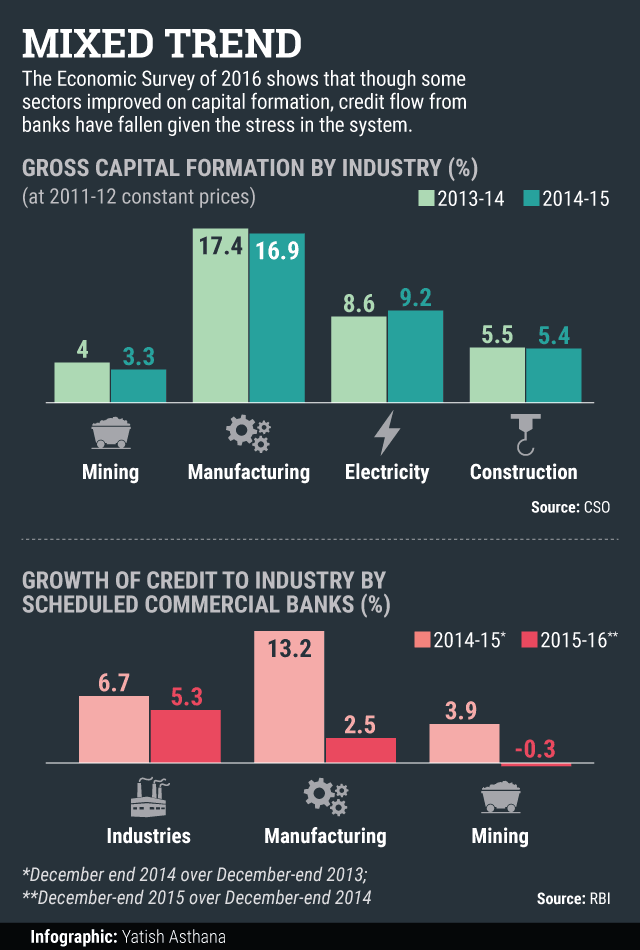 Among the notable policy measures taken in the infrastructure space over the last one year, foreign direct investment in railway infrastructure was allowed up to 100%, the Ujjwal Discom Assurance Yojna scheme for financial turnaround of power distribution companies was launched and a scheme for the development of about 1,177km of National Highways was started.

However, infrastructure has not been kept in the first volume of the economic survey as was the case last year. Subramanian changed the structure of the Survey in 2015 by dividing it into two parts. The first part analyses the economic indicators and contains a commentary on the policy vision that the government should adopt. The second part is in line of traditional Survey documents that list the economic performance of various sectors.

Experts have noted the absence of infrastructure in the first volume.

“Infrastructure has not been considered as an important driver of growth. Last year, infrastructure was a key element of the economic survey and was a forward looking sector,” said Rajiv Kumar, senior fellow at Centre for Policy Research.

He, however, added that whatever steps and initiatives have been taken by the government in transforming infrastructure sector will help achieve and sustain higher economic growth.

The survey also identified that a twin balance sheet problem—the stressed financial positions of state-run banks and some business houses—as one of the foremost reason for low private sector participation. A recent report by rating agency ICRA Ltd noted that stress in the banking system will continue for few years as gross non-performing asset ratio will worsen in the January-March 2016 quarter, given the Reserve Bank of India’s asset quality review exercise.

However, minister for state for finance Jayant Sinha, in reply to a question in the Lok Sabha on Friday, said that the government has taken steps to decrease stress in all sectors of the industry which will eventually decrease stress in the banking system.

“We have strengthened the resolution process for sectors which are not able to pay back,” he added.