Sovereign wealth funds have stepped up their private market investments after the coronavirus crisis, but with valuations barely budging despite a shaky economic backdrop there are questions about the prospects for future returns.

Private markets, which include private equity, venture capital, real estate and infrastructure, have emerged as a cornerstone of sovereign funds' portfolios in recent years as they scout for higher returns in an ultra-low interest-rate environment.

While funds have increased the portion of their outlay in public, or listed equities, in 2020, private markets still account for the largest chunk of overall investment at $55.5 billion year to date, according to data from the International Forum of Sovereign Wealth Funds (IFSWF), up from $35 billion last year after a pick-up in deals in the second half.

The overall number of investments year to date has fallen by 10% to 274. Advisers say the average deal size, and therefore the valuations of companies and other assets being acquired, has generally held up in the aftermath of the crisis.

"We are flat out right now, probably at double-digit in terms of activity levels working with the private markets versus last year - and this time last year wasn't quiet." 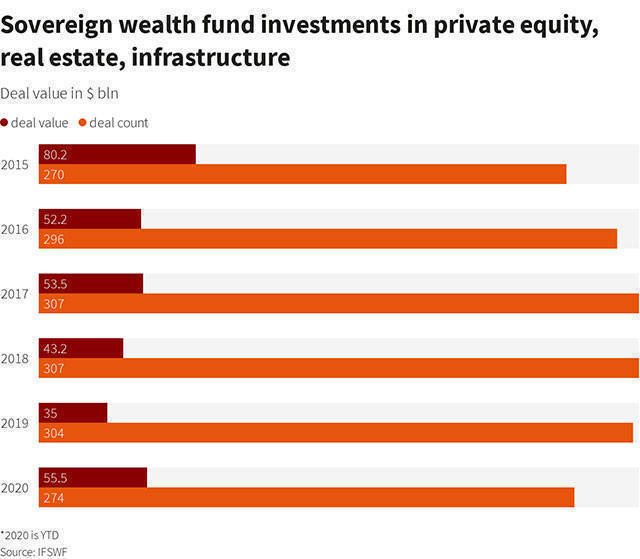 Sovereign funds have played a part in $50.2 billion worth of private equity deals since April, 13% up from the same period last year, PitchBook data showed.

Some of that relates to bailouts of troubled domestic firms in the pandemic's wake, as well as the participation of several in a major deal to raise stakes in BlackRock in May.

Venture capital also remained popular, with sovereign funds taking part in deals with a total value of $14.7 billion since April, up more than half from the year-ago period, PitchBook data showed.

Singapore's GIC and Abu Dhabi's Mubadala, two wealth funds which claim some of the most active venture capital units, have invested the most since April, according to Global SWF. 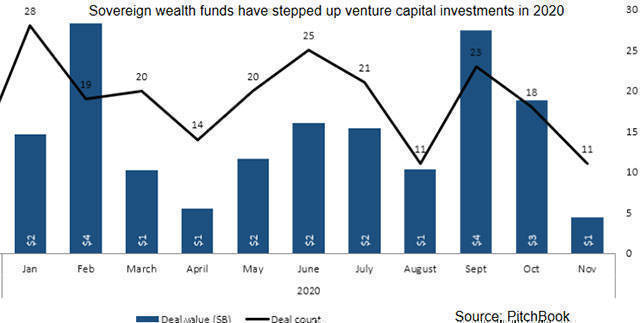 Jackson-Moore noted the contrast with the period after the 2009 global financial crisis, when asset prices fell and many funds scaled back their private market investments.

Current asset prices were still "very high" despite uncertain economic conditions, he said, raising questions of whether 2020-21 deals would be a "good vintage".

In part, high valuations may reflect where sovereign funds are putting their money, such as within e-commerce or healthcare.

"Sovereign wealth funds are investing in sectors that would have benefited during the COVID crisis and that is reflected in the prices they're paying," said Victoria Barbary, IFSWF's director of strategy and communications.

It also reflects how valuations in the United States, particularly of larger companies, have rebounded from their COVID-19 lows, while there have been less distressed situations and bankruptcies compared to previous recessions, according to PwC.

The outlook for sovereign funds may also be clouded by several European countries tightening their investment rules.

Germany in April moved to protect its domestic firms, while Britain's National Security and Investment Bill will bring new powers to scrutinise and intervene in "malicious" foreign investment.

"The recent trend - the tightening of foreign investment regulations as a result of SWFs becoming more direct and active investors - has been accelerated by the COVID-19 crisis," said Ma, adjunct professor, NYU School of Law.

He added that the pandemic had triggered worries across continents of a buying spree by foreign investors, particularly within the medical sector.