Although big-bang measures to shore up discretionary spending were conspicuous by absence in finance minister Arun Jaitley's budget speech, the consumer sector may just scrape by on the back of initiatives targeted at reviving rural incomes, as also the cut in personal income tax rate for people in the Rs 2.5-5 lakh bracket. Put together, these measures are likely to boost consumer spending, which has taken a serious beating following the government's demonetisation move.

In fact, rural India turned out to be one of the major gainers from the budget, thanks to the government's emphasis on National Rural Employment Guarantee Act (NREGA) and Pradhan Mantri Gram Sadak Yojana (PGMSY), aimed mainly to woo the agricultural community before the crucial state polls get underway.

An increase in the NREGA outlay to Rs 48,000 crore and farm credit target to Rs 10 lakh crore, creation of a Rs 5,000-crore dedicated micro-irrigation fund and greater allocation of Rs 9,000 crore for crop insurance schemes were some of the major highlights for the farm sector. 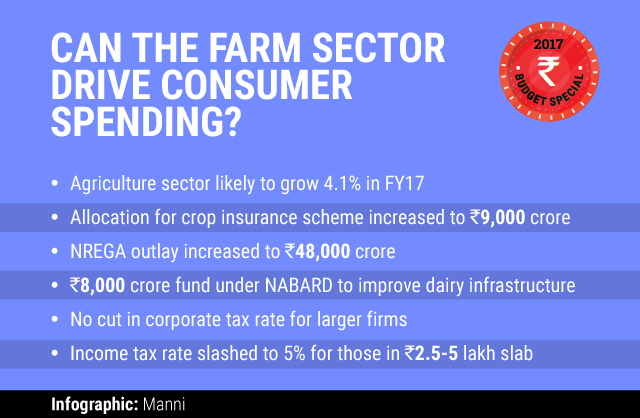 The FMCG sector believes that focused efforts to boost the agrarian economy and improve agricultural productivity, and increased investments in NREGA should augur well for rural consumers. “The reduction of direct tax for individuals earning less than Rs 5 lakh, too, will increase disposable incomes and drive demand for mass products,” said Vivek Gambhir, managing director at Godrej Consumer Products Ltd.

Saugata Gupta, MD & CEO, Marico Ltd, agrees. He believes the emphasis on the economy's digitisation, coupled with the implementation of the GST, will lead to higher compliance and help organised players in particular.

The above moves, however, may be the only solace for FMCG and retail majors, which would otherwise be disappointed given the government didn't propose any cut in corporate tax rates.

“The only disappointment, I would say, is the absence of any cut in corporate tax rate for larger firms, which most people had expected,” said Sunil Duggal, CEO of Dabur India Ltd.

The budget, however, uplifted the spirits of small- and medium-sized enterprises, which will now be paying less towards corporate taxes, given the rate has been slashed to 25% from 30% for MSMEs.

The largely unorganised dairy sector is likely to get a fillip, thanks to the government's decision to set up a fund to help farmers modernise their farms. The Dairy Processing Infrastructure Fund, which will have a corpus of Rs 8,000 crore, will help farmers set up infrastructure to process milk and produce other value-added items.

Though dairy companies welcomed the step, they pointed out that there are more serious concerns regarding milk procurement and backward integration. “It’s a welcome step as nearly 70% of the milk produced in the country can’t be supplied due to lack of proper processing facilities...but there is no dearth of money from investors to set up such infrastructure,” said Rahul Kumar, MD at dairy giant Lactalis India.

Expectations were also rife that the government will dole out tax sops for the aam aadmi, especially in the aftermath of the demonetisation move. As expected, the budget brought some joy for taxpayers, with personal income tax in Rs 2.5 lakh-5 lakh bracket having been reduced to 5% from 10%. The increased savings in the hands of people may impart some push, albeit little, to discretionary spending by urban consumers.

In the education space, there are some bright spots, such as setting up of an innovation fund for school education, identification of more colleges for autonomous status and a national testing agency for all entrance exams. However, experts feel the government could have been a lot more proactive on the sector.

The scrapping of Foreign Investment Promotion Board (FIPB) is likely to ease the inflow of foreign investments into the country. “Given most sectors are under the automatic route, FIPB was losing its significance. The move to abolish it is positive and may give a fillip to FDI,” said Aakash Choubey, partner at Khaitan & Co.