The boom in private investment activity in the country led by early-stage deals didn’t just make for a big year for corporate fundraising. It also spelled money for law firms.

While the fraternity of corporate law firms saw one of the haloed firms in the business, Amarchand & Mangaldas & Suresh A Shroff & Co, break apart as the Shroff brothers, who jointly ran the firm, formally split over an acrimonious personal dispute, others grabbed the opportunity.

Here’s a look at the top five law firms in the PE and M&A space based on preliminary data collated by VCCEdge, the data research platform of VCCircle. 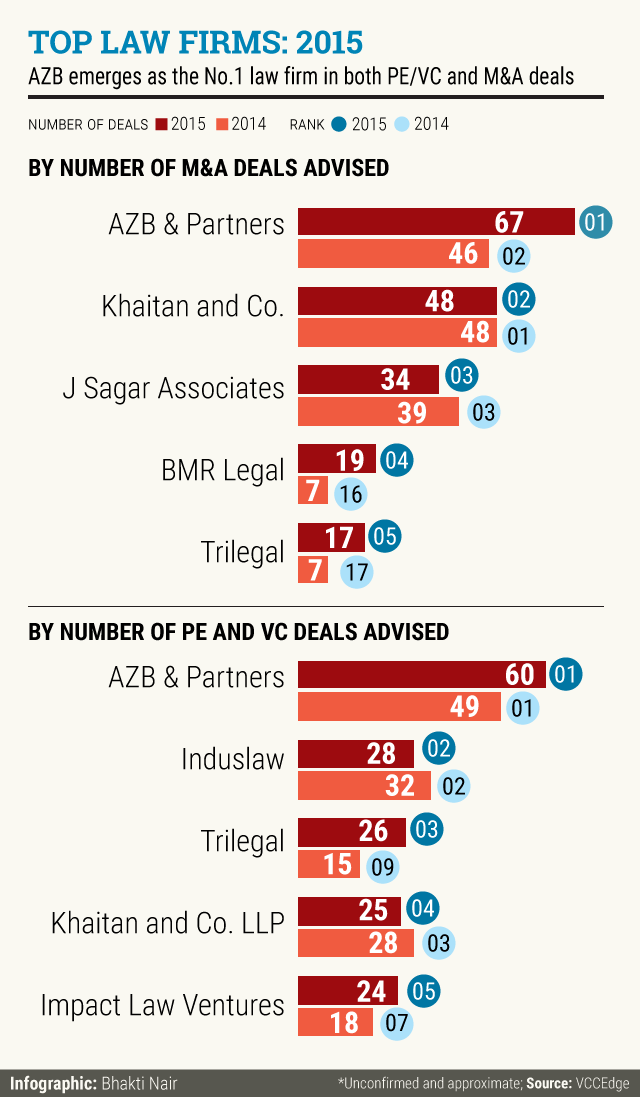 For the private equity and venture capital space, AZB galloped hard to not just retain its pole position but stretch the gap with the number two player Induslaw. Indeed, AZB advised on more deals than the two law firms right behind it. The data captured not just pure PE and VC (barring seed funding rounds) transactions across sectors but also deals involving the public equities market by PE-style private investors and venture debt.

Those that narrowly missed the charts include Samvad Partners, JSA and BMR Legal.

If only late-stage PE deals are considered, heavyweights AZB, Trilegal and Khaitan are joined by Shardul Amarchand Mangaldas and JSA in the top five list. Interestingly, by value of deals advised, these two are pushed back with the firm of Shardul Shroff's younger brother Cyril nudging in along with Linklaters.

Linklaters found itself at the top of the chart by virtue of a sole deal where it advised German firm Senvion in the bulge-bracket deal where Suzlon sold it to Centerbridge Partners.

Notably, if all the PE and VC deals advised by erstwhile Amarchand & Mangaldas (before it split) along with the two new offshoots are paired together, it was the second most active law firm behind AZB in both value and volume of deals, as per VCCEdge.

This marks a much better positioning compared to 2014, when it was lower down in the PE legal advisory league tables.

In the M&A legal advisory business, AZB pipped Khaitan as the top law firm with almost 50 per cent rise in the number of transactions it was involved in and sealed more than a deal each week through 2015.

Khaitan maintained the number of deals where it advised but slipped to the second spot. BMR and Trilegal entered the top league, pushing out Amarchand & Mangaldas and DSK Legal. However, all the three Amarchand firms put together would have remained in the top M&A advisory charts by volume.

By deal value, Amarchand & Mangaldas, by far the marquee law firm last year, handed over the reins to AZB. JSA, Khaitan, Nishith Desai and Luthra & Luthra rounded up the top five slots with the first two entering the top league and pushing out Amarchand and Crawford Bayley that shone last year when it advised Sun Pharmaceutical on its acquisition of Ranbaxy.