Private investors opened their purse strings this year, catapulting the aggregate commitment in the Indian realty sector to the highest level since 2008.

Although the number of PE deals in the sector dropped marginally from last year, bigger-ticket transactions boosted total capital flow to $2.8 billion, according to VCCEdge, the data research platform of VCCircle.

Global investors led by pension and sovereign funds ramped up their exposure to the sector at a time when analysts expect the realty market to shrug off the sales slowdown.

Indeed, if the last quarter of the year could have sustained the momentum gained at the beginning of the year, capital flow could have come close to the 2008 level of $3.8 billion. A record amount of money flowed into real estate in the boom period of 2007 and some deals spilled over to 2008 even as the financial markets crashed. 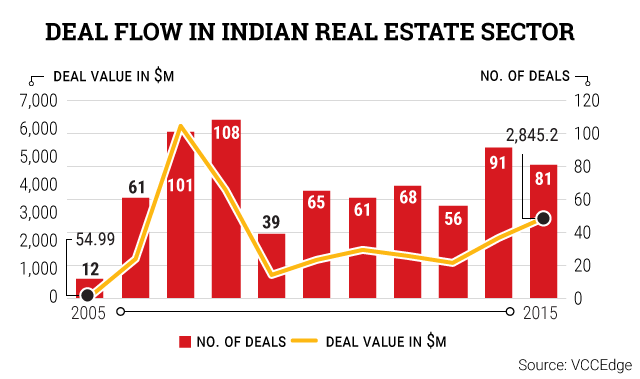 The deal activity in 2015 was led by global investors, who either came back to real estate after a long gap or added the sector to their investment strategy.

The residential segment has traditionally seen most deals and the trend continued this year, too. The mainstay in the housing space is structured deals, which go to refinance existing lenders as cash flow has dried up due to slow sales.

On the commercial front, fully constructed, pre-leased assets remained investors' favourite. The top deals include Blackstone bringing a close to its much-delayed deal to buy 247 Park in Mumbai for Rs 1,060 crore from joint owners Milestone Capital and Hindustan Construction Company.

In a rare controlled-style transaction, GIC picked up around 64 per cent stake at the entity level in business park firm Nirlon Ltd for roughly Rs 1,278 crore.

The bounce in realty PE deal-making is also a reflection in overall bump in private funding transactions this year.

Click here to see the highlights of the year.