The Indian central bank held back wider market calls on loosening the monetary policy and maintained a status quo on both key policy rates, especially the liquidity generator – the cash reserve ratio (CRR) – in its mid-quarter policy review on Monday. Caught in a tightrope walk between reviving the economy and controlling inflation, the Reserve Bank of India said that further reduction in the policy interest rate at this juncture could intensify the inflationary pressure in the economy.

In April this year, RBI pulled a surprise by cutting the policy rates by 50 basis points, more than the 25 basis points expected by the markets.

But in the current review, it has retained the repo rate (the rate at which commercial banks borrow from the RBI) at 8 per cent and the CRR at 4.75 per cent.

RBI said that it had frontloaded the policy rate reduction in April with a cut of 50 basis points based on the premise that the process of fiscal consolidation critical for inflation management would get under way, along with other supply-side initiatives.

“Our assessment of the current growth-inflation dynamic is that there are several factors responsible for the slowdown in activity, particularly in investment, with the role of interest rates being relatively small. Consequently, further reduction in the policy interest rate at this juncture, rather than supporting growth, could exacerbate inflationary pressures,” it said.

While analysts were split over the extent of repo rate and CRR cuts, most expected a cut of 25 basis points in at least one of the two money policy tools. Earlier, commercial banks hinted that lending rates would see a decline only if CRR is pruned.

The stock market was visibly shaken, with the 30-stock benchmark index Sensex dropping 1 per cent after the RBI announcement. The market was up 1 per cent in early morning trades after positive sentiments from Greece’s national elections raised hopes for bailout measures to be implemented by the Mediterranean nation, which is close to the edge of an exit from the eurozone.

RBI is facing a difficult situation in reviving an economy in the midst of a stagflation, a difficult combo of stagnant growth and high inflation.

India’s GDP growth has slowed to 6.5 per cent in FY2012 (5.3 per cent in Q4 FY12) for a variety of reasons – not just the high interest rates hitting the cost of borrowing for the industry sector. At the same time, the central bank is battling stubborn inflation, which is still high due to the increasing price of food articles and fuel. Inflation (both wholesale and consumer) inched up in May 2012, making a further cut in interest rates a risky bet for RBI. In fact, more liquidity in this market could push up the prices further.

For May 2012, the Wholesale Price Index-based inflation grew 7.55 per cent on a year-on-year basis, compared to 7.23 per cent in April. The increase was due to higher headline inflation (food and fuel) while core inflation (manufactured products) was marginally lower for May, compared to April 2012. 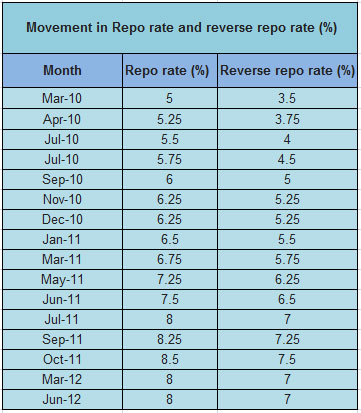 The recent revision in Minimum Support Price for kharif crops between 15-53 per cent is considered to be the key factor for increased headline inflation. On the other hand, marginal fall in core inflation did not make the RBI happy, as it is being considered sticky with an upward bias.

The policy measures are aimed at not increasing the overall liquidity in the system through a CRR cut, which would have fuelled inflation. At the same time, they provide more liquidity to exporters to leverage the recent currency depreciation to boost their sales. RBI has raised the refinance limit for exporters to 50 per cent from 15 per cent. This will be crucial for the engineering goods industry, petroleum products and gems & jewellery, which accounted for close to 57 per cent of India’s exports in 2011-12.

Although there has not been any rate cut this time, the direction of interest rates is expected to be downwards. But much will depend on the economic situation in India and across the globe. As pointed out by the RBI, the US Fed and the European Central Bank might opt for another round of quantitative easing, if the situation deteriorates further. This will have far-reaching consequences for India, both in terms of trade and capital flows.

The central bank, in its guidance on policy stance, said that the management of liquidity remains a priority. Even as the liquidity situation converges to the comfort zone, the RBI will continue to use open market operations to contain liquidity pressures.