The Reserve Bank of India kept its main lending rate unchanged on Wednesday and hinted any further reduction was unlikely anytime soon in an unexpected move that stumped analysts and investors.

The committee’s unanimous decision to keep the repo rate at 6.25% in its first policy review of 2017 comes as a surprise as it was widely expected to cut interest rates after inflation eased in recent months and the government tabled a fiscally prudent budget earlier in February. 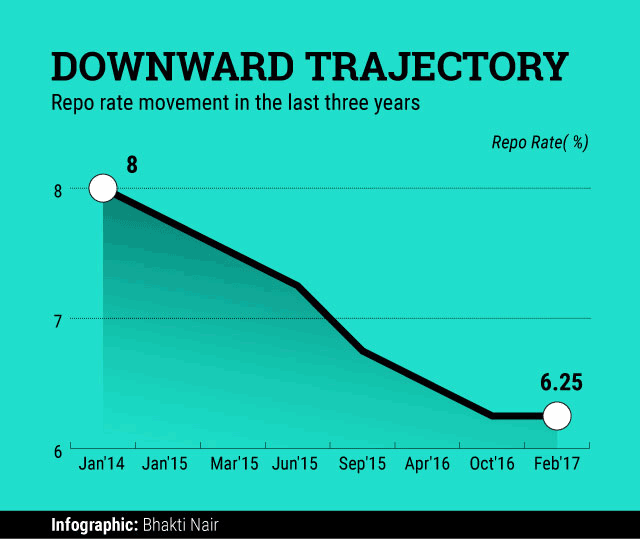 This is the third time when the RBI has made a decision that wasn’t widely expected since Urjit Patel took over as governor in September. The committee had trimmed the repo rate by 25 basis points in October and stood pat in December.

The RBI said in a statement on Wednesday that the decision to keep rates on hold is aimed at achieving the goal of retail inflation at 5% by March and the medium-term target of 4% within a band of plus or minus 2%. However, the RBI said it is changing its stance from “accommodative” to “neutral”.

“The committee decided to change the stance from accommodative to neutral while keeping the policy rate on hold to assess how the transitory effects of demonetisation on inflation and the output gap play out,” the RBI said, referring to the government’s shock decision in November to ban high-value notes that has crimped demand and hurt business activity.

Stocks fell after the policy announcement. The 30-stock benchmark BSE Sensex, which had opened higher, slipped as much as 0.65% before paring some losses to end 0.16% lower. 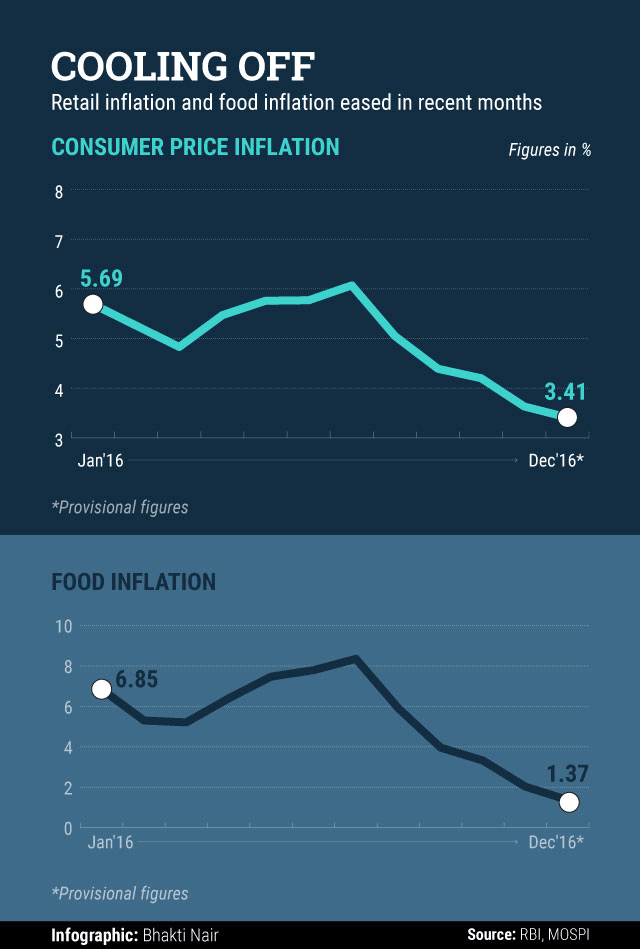 Annual consumer price inflation eased to a two-year low of 3.41% in December.

The RBI said the drop in retail inflation in November and December was larger than expected, but it was almost exclusively on the back of deflation in vegetables and pulses. It also said some “demand compression” may have contributed to this outcome and that anecdotal evidence points to some distress sales of perishable items having accentuated the decline in vegetable prices.

The RBI said inflation is edging up on the back of rising energy prices and a mild firming up of demand. It noted three significant upside risks to inflation—hardening international crude prices, exchange rate volatility on account of global financial market developments and the fuller effects of the hike in wages and allowances of government employees.

“The focus of the Union budget on growth revival without compromising on fiscal prudence should bode well for limiting upside risks to inflation,” it added.

The RBI pared its estimate for growth in gross value added—a measure of the value of the goods and services produced—for 2016-17 to 6.9% due to the government’s note ban decision. This is lower than the government’s own revised estimate of 7% for the fiscal year that ends in March.

In its December policy review, the central bank had slashed its growth forecast to 7.1% from 7.6%.

The RBI, however, expects growth to recover in 2017-18 to 7.4% as discretionary consumer demand held back by demonetisation bounces back and economic activity recovers.

It also said that, led by advanced economies, global growth could pick up modestly in 2017. But it added that global trade remains subdued due to an increasing tendency towards protectionist policies and heightened political tensions, in an apparent oblique reference to executive orders on international trade signed by US president Donald Trump and the UK’s decision to exit the European Union.