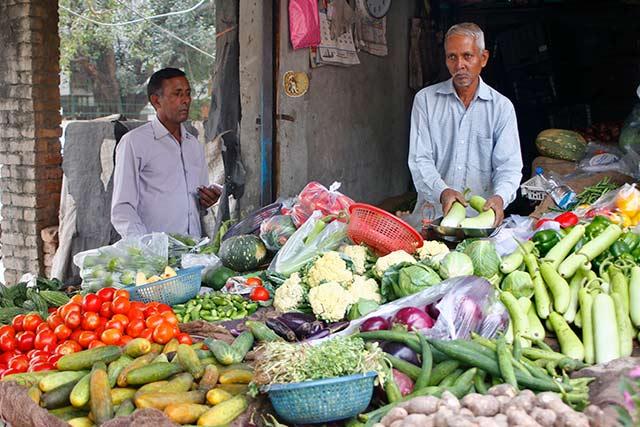 The Indian government on Friday projected slower economic growth for the year through March but didn’t take into account the impact of the banknote ban in November that has caused a cash crunch and hurt business activity.

Gross domestic product is likely to expand 7.1% in 2016-17 from 7.6% in 2015-16, the Central Statistics Office said in its first advance estimates of economic expansion for the current financial year.

The government didn’t specify any reason for slowing growth, and said it took into account April-October numbers for industrial output, April-September financial performance of listed private-sector companies and government accounts—including for tax, bank deposits, rail, air and sea cargo—for the first seven to eight months of the current fiscal year.

However, Prime Minister Narendra Modi’s decision in November to scrap high-value banknotes to fight graft and tax evasion has crimped consumption and output since then. This has prompted several economists and ratings firms to trim their growth forecasts for Asia’s third-largest economy to around 6.5%. Private surveys have also shown India’s factory output and services activity, which together account for more than four-fifths of the GDP, shrank in December.

Government officials defended the advance estimate, which comes just ahead of the budget next month.

“The numbers for November are not included as the figures of deposits and credits in this month were highly volatile, particularly for the financial and professional services, insurance and real estate sectors,” TCA Anant, India’s chief statistician, told reporters. The estimate will be revised on 28 February, he said.

Former chief statistician Pronab Sen wasn’t convinced, though. “May numbers can be lower,” he said, referring to the actual full-year growth data the government will announce that month. “As I have been saying, growth is likely to take a hit of about two-three percentage points,” he added.

Talking to the VCCircle Network on 12 December, Sen had said that as an economic decision, “demonetisation doesn’t hold water”.

The statistics office said also that growth in gross value added (GVA), a key input of GDP that the Reserve Bank of India tracks, is likely to drop to 7% from 7.2%, it said.

That’s lower than the RBI’s revised projection. The central bank had lowered its estimate for GVA growth to 7.1% from 7.6% in December, when it unexpectedly kept interest rates on hold and admitted that the banknote ban might interrupt industrial activity and drag down growth this financial year.

DK Joshi, chief economist at ratings firm Crisil, said the RBI might hold off on rate cuts. “As far as the impact of demonetisation is concerned, it should stabilise after March,” Joshi said.

Among sectors, manufacturing and most services are likely to record slower growth this fiscal year compared with last year but growth in agriculture is projected to accelerated, the government said.

Growth in the construction, trade, hotels, transport, financial sectors and real estate is also likely to be slower this year.

Still, some industry executives are optimistic.

“This is the third successive year when the economy will clock above 7% growth, indicating that the underlying fundamentals are strong,” said Chandrajit Banerjee, director general of the Confederation of Indian Industry. “The demonetisation drive… is likely to be a blip in the growth momentum as demand will re-emerge once the situation becomes normal.”