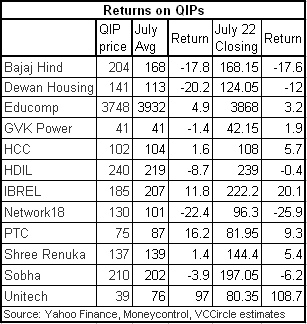 Qualified Institutional Placements or QIPs as they are more popularly known were a popular capital raising instrument till recently for India Inc. The markets have picked up in the current financial year, making it an opportunity for companies to raise capital in a market where liquidity had dried up. QIPs are a quick and cost effective means to raise capital, and Indian companies wasted no time in making their capital raising announcements through the route. Over 30 companies reportedly announced plans to go for QIPs, with the total value estimated at Rs 40,000 cr in QI FY10.

But the enthusiasm over QIPs was short-lived, particularly as the markets nose-dived briefly following the high-expectations budget. Even though the broader equity markets have recovered since, some sheen seems to have gone off QIPs. In fact, a number of companies are exploring alternate capital raising methods now – GDRs, IPOs and FPOs.

VCCircle analyses the QIP story a little further and if the route still has steam left in the instrument.

The Story So Far

The QIP story began with a successful capital raise by two real estate companies –Unitech and India Bulls real estate in the first two months of FY09. While Unitech managed to raise capital of $325mn through the QIP route, Indiabulls real estate raised $565 mn. And indeed the early gains on the QIPs were impressive – investors in Unitech saw a rise of 33% the initial investment in a month’s time, while Indiabulls real estate was trading at an 8% higher price than its QIP price.

Companies took the opportunity in a low liquidity environment to either fund their expansion plans, their existing projects or re-align their debt-equity ratios. Despite the robust initial performance of QIPs, however, some of the later entrants into the QIP race did not receive a strong welcome. Take the instance of GMR Infrastructure, Sobha Developers and HCC. GMR Infra recently withdrew its Rs 4800 cr QIP citing market conditions, while Sobha Developers were able to raise only Rs 53 cr as opposed to the Rs 145 cr it had targeted. HCC Constructions had a similar experience – of the Rs 1500 cr it intended to raise, only Rs 480 cr was the actual fund raise.

The QIP story is one of a Catch-22. When the markets are flat to falling, investors are likely to be concerned about future returns. On the other hand, in rising markets and valuations need to be justified. If stock prices rise significantly over a short span of time, the price could be perceived as higher than fair valuation. This fact is complicated by the fact that QIPs have a floor price of the average of previous two weeks’ prices, thus making it inflexible in pricing.

Moreover, QIPs have a strong advantage of not having a lock-in period. This essentially means that investors can sell the stake acquired in the company through the route at anytime. Hence, they do not necessarily need to take either medium to long term calls on the sector or on the company. And in a scenario of rising markets, can expect quick returns.

Also, investment bankers are still recommending QIP issuances to companies as well as witnessing companies’ interest in raising capital through the route. This is particularly true for sectors that are closely tied to the broader economy. With improvement in the  growth outlook and strong quarterly results for Q1 FY10, infrastructure and consumption oriented sectors are expected to raise capital via QIPs. The banking and financial services space is a case in point. So far, Bank of Rajasthan and LIC housing finance had declared the intention of doing QIPs, though no headway had been made so far. Its only earlier during the week that LIC Housing Finance has given a time frame for its QIP – which will be done during Q2 FY10. Yes Bank too announced a QIP during the week, and HDFC has received a go ahead for one by its board as per reports today.

A revival in interest is evident from some other companies as well. REC and REI Agro too have announced QIP plans.

Is QIP losing sheen to other fund raising instruments?

But it still looks like some damage has been done to the QIP party by the lack of investor response to some QIPs and poor market performance. Recent corporate announcements suggest that appetite for me capital infusion still exists. However, routes other than QIP are increasingly coming into focus.

For instance, Tata Power and Suzlon energy announced GDRs, while Reliance Capital said it will go for an IPO soon. The UB group too expressed a desire to raise more capital, though it is reportedly categorical about not taking the QIP route. In fact, both Tata Power and UB have cited the same concerns – of preferring a wider investor base than that afforded by a QIP, which limits the investor base to investors in India. It does need to be noted however, that the IPO route is perhaps not directly eating into the QIP, since a number of companies had planned IPOs earlier in the year - a recent broking report indicates that India inc has plans to raise over Rs 53,000 cr in IPOs this year, which is far higher than the estimated Rs 40,000 cr in QIPs.

In sum, while there is likely to be a host of other capital issuance routes used going forward, some of which will necessarily lead to a reduction in QIP issuances, companies are still looking at raising funds through the QIP route. This is particularly given a boost given the improvement in market conditions and hence investor returns.