My Vale missteps illuminated for me some of the risks of going where it is darkest, but I will not let them stop me from trying again. This time, my focus is Volkswagen, a company that has, over the course of a month, gone from being just another mature company in a bad business (automobiles) to one beset on all sides by governments, lawyers and investors. In this case, though, unlike Vale and Lukoil, much of the uncertainty comes from self-inflicted wounds and as its stock price drops, it is worth looking at whether the market reaction has been overdone.

For the last decade, Volkswagen has worked hard to make itself a global automobile giant. Last year, the company was the leading auto company in the world, in terms of revenues, and second only to Toyota in units sold. In the US, it has a much lower profile, with a market share in the low single digits.

The company has been able to weather the 2008 crisis well, and has seen revenues and earnings climb, albeit at the moderate levels that befit a mature automobile company. 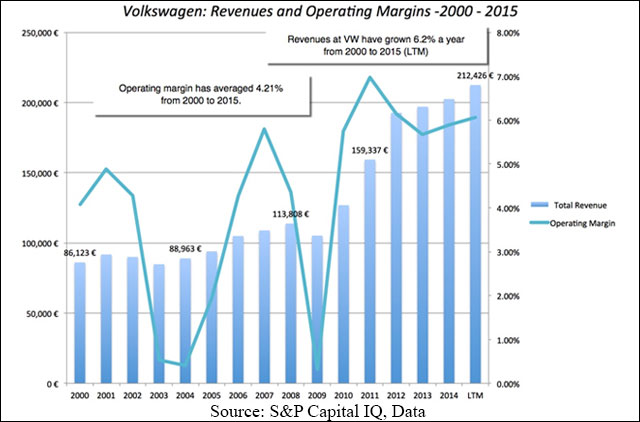 The company's operating margin of 6.07% in the last twelve months (ending June 30, 2015) was higher than its historical average margin of 4.21%. During the period, the Volkswagen auto offerings have expanded to include not only Audi and Skoda but also luxury brands including Bentley, Lamborghini, Porsche and Bugatti.

The Scandal, The Stock Price and Knee Jerk Contrarianism

In the last few weeks, the wheels have come off the Volkswagen bus. The trigger was a revelation that VW had designed the computer software on its diesel automobiles to fool the EPA, when it was testing for emissions; this BBC story explains it well. Once the story became public, Volkswagen admitted that it had screwed up big time, its CEO resigned, a whole host of top managers lost their jobs and Volkswagen's stock price collapsed, losing almost 40% of its value in the last month. 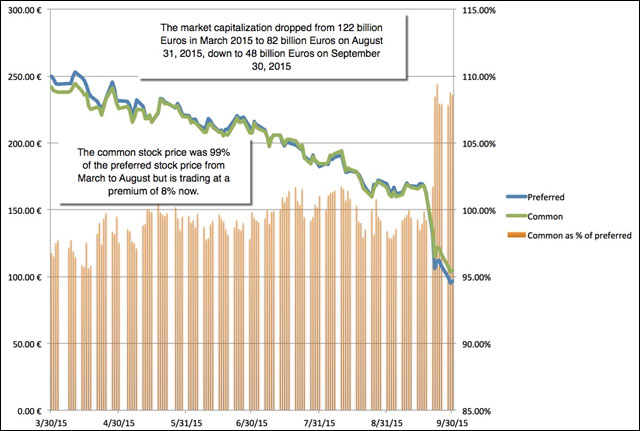 There is no doubt that this is more than a tempest in a  teapot, and that that there will be consequences, but are the consequences dire enough to cause a loss of more than 30 billion Euros in market capitalization? That remains the key question, as investors who are attracted to beaten up stocks look at Volkswagen. A knee jerk contrarian strategy may argue that history and empirical evidence is on your side and push for investment in Volkswagen now, but I am wary of using average returns from past studies, often based upon large samples of companies, to justify investing in one company that meets the criteria.

In the aftermath of Volkwagen's revelations, the news media have turned their full attention to the company's foibles, real and made up, with a skew towards putting the worst possible spin on the company's actions. Thus, the fact that the company has close ties to German lawmakers is viewed as a sign of the company's moral turpitude, as if other auto makers do not have their own stables of legislators pushing for preferential treatment.  Thus, the first step in assessing the impact of this scandal on Volkswagen is separating the wheat from the chaff, or in Nate Silver's words, the signal from the noise. It is quite clear that this scandal is going to cost Volkswagen, in many different arenas, starting with penalties being imposed by governments and regulators for the deception, continuing with the costs of recalling and fixing the cars and expanding to cover lost sales, as potential customers switch to competing car companies.

At the moment, the magnitude of these costs is still murky, but waiting for them to be clearer, as some investors seem to be doing, is an investment cop out. The market is already imputing a cost , and investors who want to invest in Volkswagen have no choice but to make their own judgments on whether the market imputed cost is too high (in which case Volkswagen becomes a buy), just right or too low (Volkswagen will be over valued).

I know that the cases are dissimilar, but to get a measure of what a scandal can cost an auto company, I looked at Toyota's experiences in 2010 with faulty gas pedals, the press coverage and controversy and the subsequent costs to the company. 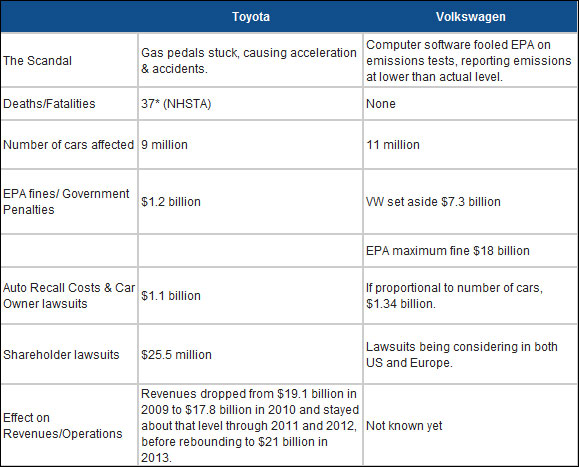 To evaluate how this scandal affects Volkswagen's value as a company, I will adopt a two-step process. In the first, I will go back a month and value Volkswagen before the revelations, but to isolate the effect of the scandal, I will assume that the market capitalization a month ago (on August 31) was right and back out the operating income that the market was imputing in the stock price. In the second, I will make judgments on the extent of the costs, with a bias towards over estimating, rather than under estimating them, and revalue Volkswagen.

To value the company prior to the scandal, I drew on Volkwagen's financial history, which is summarized here. If you truly want to numb yourself, try reading Volkswagen's annual report, a model of opacity and bulk. Once I had those numbers and examined the landscape of the auto business, my initial narrative for Volkswagen was a boring one: it is a mature firm that I expect to grow barely (at the same rate as the economy), earn no excess returns and an established capital structure and regional exposure. Rather than try to value the company, I took the market capitalization of 82 billion Euros that the company was trading at then, and solved for the operating income that the firm would need to generate to be trading at the prevailing market value, arriving at 8,423 million Euros in operating income, well below the 12,886 million Euros that the company earned in the trailing 12 months, and about 20% below the average operating income generated over the last five years. 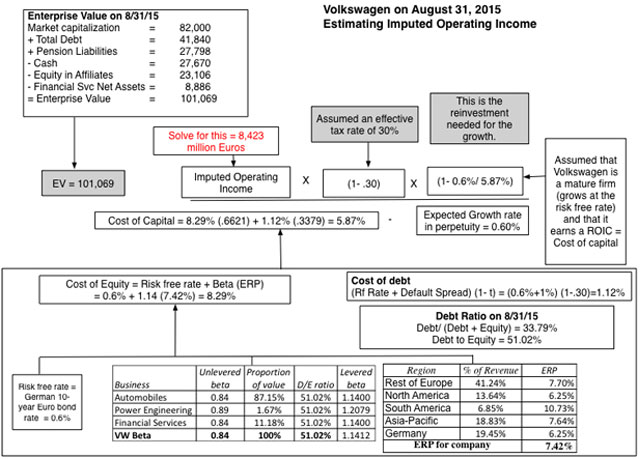 There have been no major financial reports from the company over the last month and the macro environment has changed little, with the German 10-year Euro bond rate stuck at 0.60%. In effect,  the only thing that has changed is that the company has revealed its deception and the costs are starting to be tallied. Using the structure that I described in the last section, I  brought in the effects of the scandal in three layers.

Note that  these costs will create tax savings, insofar as they are tax deductible. In my assessment, in keeping with the conservative estimation, I will assume that only half of the costs on the first two items (fines and legal costs) are tax deductible. Finally, note that if Volkswagen pays the fines and incurs recall/legal costs, they will show up as expenses in the near years, and that you should expect to see reported losses in the mega-billions.

There is one more potential cost, which is that the management of Volkswagen will be focused on managing the scandal so much that they will not be able to direct their attention towards managing the company. If this were a creative company in a good business, I would be calculating the cost of lost investments and foregone growth and reducing my value. With Volkswagen, a not-that-imaginative company in a bad business (at least based on my narrative), I am less concerned, since an auto management's effort to grow faster (by acquiring other companies, expanding market share, entering new markets) is just as likely to destroy value, as it is to add value. In a perverse way, Volkswagen's stockholders may be better served by managers doing too little rather than trying to do too much.

With these conservative (almost worst-case numbers), I revalued Volkswagen's equity at 52.2 billion Euros, about 10% higher than the market capitalization of $48 billion at the time of this assessment.  While that may not seem impressive, that is with an extremely conservative assessment of costs. Incorporating  the full tax benefit from the government penalties and auto recall increases the value to 56.7 billion Euros, and assuming a smaller penalty or less in legal costs will push the value up even further. (Negative numbers in the last column indicate under valued.) 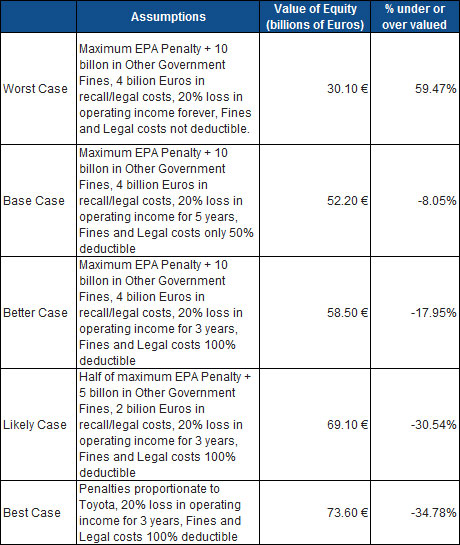 For the final question of whether to buy the ordinary or preferred shares, here is the trade off. The preferred shares have dropped by more than the ordinary shares and have historically been more liquid, but in times when you want a say in who runs the company and how it is run, it is better to own the ordinary shares. In fact, I would argue that the reason the common shares are trading at an 8% premium over the preferred shares now, as opposed to trading at par just a month ago, can be traced to the reawakening of interest in control and corporate governance that comes out of every scandal.

This may be a reflection on my moral compass, but I find it difficult to muster the outrage that some people seem to feel about Volkswagen's deception. I think that the company's acts were stupid, short-sighted and greed-driven, but there have been far more appalling acts in corporate history, that are more deserving of my outrage. Volkswagen should be punished and the market has already meted out a hefty penalty, but looking at the possible costs of this scandal, I think that the market has over reacted. My market order for ordinary shares in Volkswagen went through yesterday, as my desire to have a say in management (with the ordinary shares) overwhelmed the bargain hunter in me (which was attracted to the preferred shares). I am investing in Volkswagen, but this will be a bumpy ride, for quite a while. This is the scandal du jour, of the moment, but there will be other news stories that draw the rubber necking crowd away. I have neither the desire, nor the inclination, to talk you into buying the stock. If you work through the numbers and come to the same conclusion that I did, I will be glad to have your company, but if your judgment leads you to a different assessment, I have no quarrels with you. To each, his (or her) own!