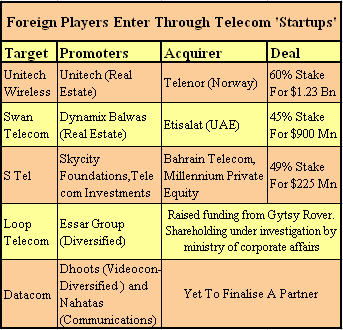 S Tel had also applied for a pan-India GSM license. This would be the second Gulf-based telco to buy into an Indian firm which owns telecom licence. UAE-based Emirates Telecommunications Corporation had agreed to acquire 45% stake in India's Swan Telecom for around $900 million.

Chennai-based S Tel is promoted by Skycity Foundations and Mauritius-based Telecom Investments. The real identity of the investors of S Tel is not known. The directors of the company, as mentioned on the company website, are S Natarajan, Santhosh Robert and Padmavathy Suresh. Bahrain Telecom has operations in six countries in the Middle East.

India is one of the fastest growing telecom markets in the world with mobile subscription growing at 9 to 10 million a month. Last year has witnessed several telecom deals where foreign players have entered Inda. Japan's NTT DoCoMo has signed a deal with Tata Teleservices and Norway's Telenor has bought a majority stake in Unitech Wireless.

"The successful completion of this deal supports our growth and expansion strategy in wireless and broadband markets and boosts Batelco's long term plans to diversify our geographical footprint and dramatically increase our scale," said Bahrain Telecom Chief Executive Peter Kaliaropoulos.

With this deal, Datacom and Loop Telecom remain the only players who were assigned spectrum licences last year and are yet to find a partner to start telecom operations in India. Datacom has been involved in a corporate battle between its shareholders Mahendra Nahata (36%) and the Dhoots of Videocon Group (64%). The two parties are reported to be close to an agreement and may finalise a partner soon.

Loop Telecom has raised some funds from Mauritius based companies but they were said to be financial investors. The clarity over shareholding of Loop is yet to emerge, and it is under investigation from ministry of corporate affairs.

Also there are several international players like British Telecom, Telecom Italia, AT&T, Americal Movil etc. who have been looking for entry into the Indian market.