Online truck aggregators gear up for the long haul

It is around six in the morning on the Delhi-Haryana border, off National Highway 1, and Swami Nath Yadav is busy cleaning his truck as he prepares for a trip to Himachal Pradesh. Yadav, who has been driving trucks for a living for the last 20 years, says work has multiplied in the past couple of months and his income has increased, all thanks to TruckSuvidha, an online truck aggregator, based in Haryana.

It isn't just Yadav. There are around 23,000 transporters on board, who have seen their earnings grow after hopping onto the TruckSuvidha platform.

Ishu Bansal, co-founder of TruckSuvidha, operated by Sarvodaya Venture, says he stumbled into the truck aggregation business. “We faced a lot of problems in our family business, when it came to getting trucks from different players. Truck drivers would charge us higher rates citing no return load. Moreover, there was no way of arranging trucks online, so we studied the market and started TruckSuvidha as a marketplace,” says Bansal.

The $40-50 billion road freight industry in India is notorious for the lack of transparency in deals, arbitrary rates, all-cash transactions and delayed deliveries, but a slew of online startups are trying to change that. Using technology, startups such as TruckMandi, TruckSuvidha, Porter, BlackBuck, GoGo Truck, FreightBazaar and CargoExchange are trying to bridge the gap among companies, warehouses, transporters and truck drivers to ensure on-time deliveries and optimum use of fleet capacity.

“This segment is growing by 10 per cent every year. One of the biggest challenges is the sub-optimisation of trucking capacity, especially on the back haul, so there was a need for a technology-driven platform to organise the industry,” said Prahlad Tanwar, director for transport and logistics at consultancy firm KPMG.

Investors have been quick to see the opportunity in this segment and are placing their bets on these truck aggregators. This year, more than $55 million has been raised by around six companies from investors, according to VCCEdge.

Still in their early stages, the on-demand truck service providers are experimenting with various revenue models. While some charge subscription fees, others rely on a commission-based model.

At TruckSuvidha, a truck driver has to first get his credentials verified. “Registered transporters can call the customer care centre and tell us where they want to go, what is the type of load they want to carry, etc. Based on this, we assign them a trip. Customers and transport agents can place their queries on the site as well,” says Bansal.

TruckSuvidha charges transporters an annual subscription fee of Rs 3,000 to Rs 18,000. “The rate depends on several factors – the type of vehicle and the services a transporter offers, the places/cities/states he is ready to go to, whether it wants to operate in multiple cities or not,” says Bansal.

BlackBuck, run by Zinka Logistics Solutions Pvt Ltd, charges a commission of 10-12 per cent from the transporter for every transaction. “While other players let transporters and clients place their demands and decide the final price on the basis of bids, we curate the demand and supply for trucks and facilitate the trip. We determine the price for each transaction instead of leaving it to the two sides to negotiate,” says Rajesh Yabaji, co-founder, BlackBuck.

Transporters on the TruckMandi platform bid for trips and the firm charges a commission per transaction. Run by Fixinnov Technology Pvt Ltd, it offers services in 15 cities covering routes in Himachal Pradesh, Punjab, Haryana, Uttar Pradesh and Rajasthan.

“Around 500 partner companies and 1,000 transporters, 30 per cent of whom are fully verified, are using our app. With nearly 6,000 trucks on board, we have a substantial presence in northern India,” says Anurag Jain, co-founder, TruckMandi.

Intra-city B2C services too are also on offer. Learning from their own harrowing experience when they ran around the city looking for a mini-truck to move a refrigerator to their new address, Senthil Kumar and A Vasister decided to set up an intra-city truck aggregation platform. “We realised a lot can be done to make it more organised and thus we started GoGo Truck,” says A Vasister, co-founder, Fruges Ventures Pvt Ltd, which runs the Chennai-based startup.

GoGo Truck has tied up with about 200 transporters who have mini-trucks such as Tata Ace, Ashok Leyland Dost and Tata 407. It claims to be getting 2,000 orders a month on its app from Chennai alone. It has recently started operations in Coimbatore.

M Suresh, regional manager, Mahindra Logistics, says with the e-commerce sector booming in Chennai, there is a huge demand for mini-trucks. “With the entry of these players, the market has become more professional. However, they are still in an early stage and have to understand market requirements which cannot happen in a month,” he says.

Six truck aggregators have raised about $55 million from investors this year, according to VCCEdge

Resfeber Labs Pvt Ltd, which runs Porter, claims to have more than 1,500 trucks, mostly light commercial vehicles, on board, making 3,000 intra-city trips a day. Its clients include Delhivery, ITC, Amazon, Godrej and Roadrunnr.

“With the help of Porter we order trucks within 45 minutes via its app or the customer care number,” says Shantilal Mandowra, owner of Shriram Plywood, a timber seller, based in Mumbai. He says Porter has helped cut his transportation costs by 25 per cent.

Besides Porter and GoGo Trucks, there are others such as Delhi-based Moovo, Bangalore-based theKarrier, besides Blowhorn, LOTrucks, Zaicus, Quifers and Shippr which are tapping the demand for intra-city delivery of goods.

Angel investor Ajeet Khurana believes that inter-city aggregators will scale up more quickly compared to intra-city operators, which is more of an informal business. “After bringing all the stakeholders online, there is a higher matching of demand and supply which has led to more efficient usage of available inventory. However, several of these intra-city aggregators will not be able to survive because customer adoption is not enough,” he said.

Interestingly, truck aggregators tie up with another, unlike the cab aggregation business where competition is extremely fierce. “Sometimes we don’t have trucks available for a certain area, but the client wants it. In such a situation, we identify other players who can offer the service, and share the revenue with them,” says Vasister of GoGo Truck. 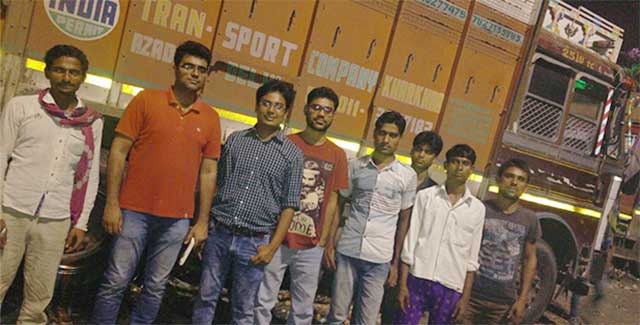 TruckSuvidha also shares leads with TruckMandi in case of non-availability of trucks on certain routes. As Bansal says, the truck industry spans the entire length and breadth of the country, and given that they are all fledging operators, it is important for players to work together to develop the market.

People Group CEO Anupam Mittal, who has invested in Porter, says the truck aggregation market is much larger than the cab aggregation market but also highly inefficient. “Therefore, it offers an opportunity to introduce disruptive models and create value.”

As he explains, the challenge is to create a service that solves the inherent problems. “You don’t have control over the driver, he is out of your sight. This business is all about execution, it is a high-operations game and teams that demonstrate that will make the cut. It is not a one-player game at the moment and there will be a handful of players as it is a large market,” he says.