Pay packages of women directors in Indian companies have shown a handsome increase of late, but the gap between their remuneration and that of their male counterparts continues to prevail.

The analysis is based on data collated from Capitaline and annual reports of only listed companies. Some large multinational firms, including investment banks, have women chiefs but their compensation is not in the public domain. Also, the analysis takes into account only cash compensation. 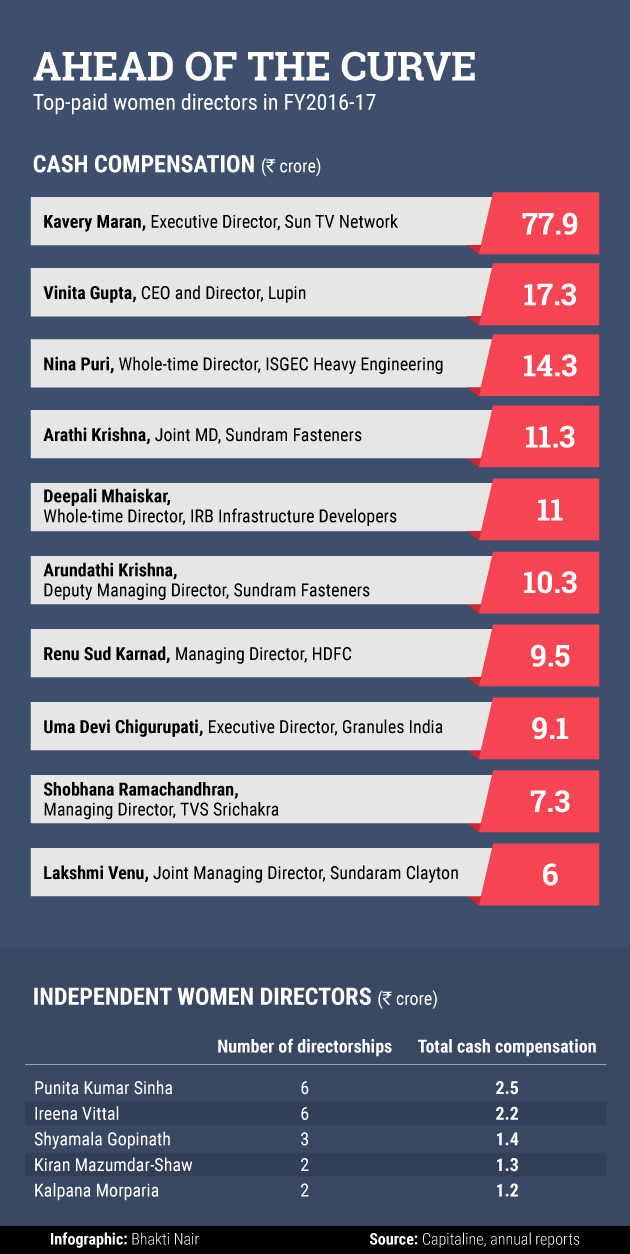 Sun TV Network’s executive director Kavery Maran continues to top the list with annual remuneration of Rs 77.9 crore. She is also the only women in the list of highest-paid directors, irrespective of gender, compiled by VCCircle.

Sun TV Network operates satellite television channels in four south Indian languages and has FM radio stations across India. The company has the franchisee rights for the Hyderabad cricket team in the Indian Premier League. It made a net profit of Rs 1,030.6 crore for the year ended 31 March 2017.

Vinita Gupta, chief executive of homegrown drugmaker Lupin Ltd, is a distant second with a cash compensation of Rs 17.3 crore. She is also among the 10 highest-paid healthcare executives in the country.

Four members of the TVS family—sisters Arathi Krishna and Arundathi Krishna, Shobana Ramachandran and Lakshmi Venu—feature in the top 10.

Arathi and Arundathi—daughters of Sundram Fasteners chairman and managing director Suresh Krishna—are directors at the automotive and engineering parts maker.

Ramachandran—daughter of former group chairman R Ramachandran, who passed away in 2004—is managing director at tyre maker TVS Srichakra.

Mazumdar-Shaw—founder, chairperson and managing director of biopharmaceutical major Biocon—is an independent director of Infosys and United Breweries. Morparia is the CEO of JP Morgan India.