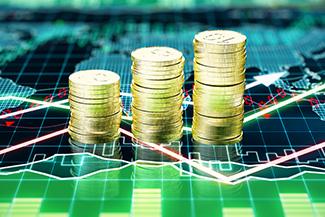 Piles of gold coins on the screen with business chart | Credit: Thinkstock

An email query sent to Securens confirming the development did not elicit a response at the time of filing this report.

In July 2014, Securens had raised $5 million from Mayfield Fund by subscribing to preference and equity shares of the company. The fund had earlier injected $6 million in the company in March 2014 and prior to that it had put in around $4 million in November 2012.

Founded by Sunil Ramanna Udupa in 2011, Securens System is an Internet of Things (IoT) company that provides alarm system solutions, including video verification and two-way voice. The e-surveillance company maintains vigilance of over 18,000 ATMs and retail sites across India as well as banks, among others.

“With the latest round of fund raising, the company plans to tap a new set of clients. The company is in talks with many gold loan outlets and has designed a customised solution for such businesses," Mint quoted Udupa as saying.

Trifecta Capital provides early-stage debt capital to Indian companies, mainly in the technology sector. It usually prices its debt between 15% and 17%. The firm also looks to acquire a stake in companies through cashless warrants or partly paid-up shares.

Venture debt is an important tool of funding for companies as it rarely involves stake dilution by the promoters. It also provides the companies more time to grow. The segment is growing in India even as venture capital activity is seeing a slowdown.