Locked-down Indian economy in its worst quarter since mid-1990s: Poll

The Indian economy is likely to suffer its worst quarter since the mid-1990s, hit by the ongoing lockdown imposed to stem the spread of coronavirus, according to a Reuters poll, which predicted a mild and gradual recovery.

Over 2.6 million people have been infected by the coronavirus worldwide and more than 180,000 have died. Business and household lockdowns have disrupted supply chains globally, bringing growth to a halt.

The April 17-22 Reuters poll predicted the economy expanded at an annual pace of 3.0% last quarter but will shrink 5.2% in the three months ending in June, far weaker than expectations in a poll published last month for 4.0% and 2.0% growth, respectively.

The predicted contraction would be the first - under any gross domestic product calculation, which has changed a few times - since the mid-1990s, when official reporting for quarterly data began.

“The extended lockdown until early May adds further downside risk to our view of a 5% year-on-year GDP fall in the current quarter, the worst in the last few decades,” said Prakash Sakpal, Asia economist at ING.

“We don’t consider economic stimulus as strong enough to position the economy for a speedy recovery once the pandemic ends,” he said. 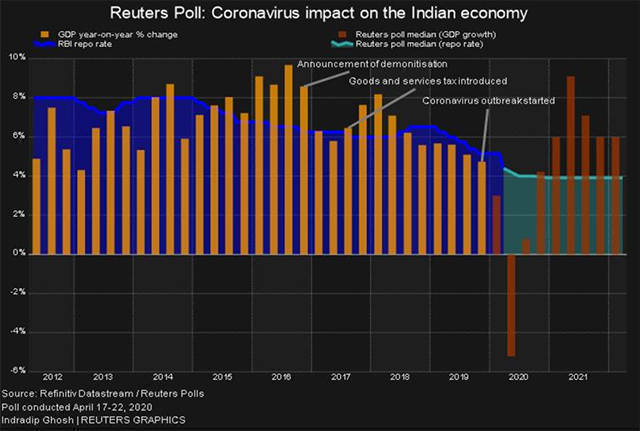 The Indian government announced a spending package of 1.7 trillion rupees in March to cushion the economy from the initial lockdown, which has been extended until May 3.

In an emergency meeting last week, the Reserve Bank of India cut its deposit rate again, after reducing it on March 27 and lowering the main policy rate by 75 basis points. It also announced another round of targeted long-term repo operations to ease liquidity.

But even with those measures, 40% of economists, or 13 of 32 - who provided quarterly figures - predicted an outright recession this year. Only one had expected a recession last month.

In the worst case, a smaller sample of respondents predicted, the economy would contract 9.3% in the current quarter. That compares with 0.5% growth in the previous poll’s worst-case forecast in late March, underscoring how rapidly the outlook has deteriorated.

The latest poll’s consensus view still shows the economy recovering again slowly in the July-September quarter, growing 0.8%, then 4.2% in October-December and 6.0% in the final quarter of the fiscal year, in early 2021.

But that compares with considerably more optimistic near-term forecasts of 3.3%, 5.0% and 5.6%, respectively, in the previous poll.

“A rebound in economic activity following the disruption is expected, but the low starting point of growth implies a gradual recovery,” said Upasana Chachra, chief India economist at Morgan Stanley.

“Indeed, before disruptions related to COVID-19, growth was slowing, with domestic issues of risk aversion in financial sector ... (and) those concerns will likely stay after the COVID-19 disruptions have passed unless the policy response is much larger than expected,” she said.

The unemployment rate has tripled to 23.8% since the lockdown started on March 25, according to the Centre for Monitoring Indian Economy, a Mumbai-based research firm.

Under a worst-case scenario, the median showed the economy shrinking 1.0% this fiscal year. That would be the first officially reported economic contraction for a 12-month period since GDP was reported to have contracted for calendar year 1979.

“Unless fiscal policy is also loosened aggressively alongside monetary policy, there is a big risk the drastic economic slowdown currently underway morphs into an annual contraction in output and that the recovery is hampered,” said Shilan Shah, senior India economist at Capital Economics.

All 37 economists who answered a separate question unanimously said the RBI would follow up with more easing, including lowering the repo and reverse repo rates and expanding the new long-term loans programme.

The RBI was expected to cut its repo rate by another 40 basis points to 4.00% by the end of this quarter. Already lowered twice over the past month by a cumulative 115 basis points, the reverse repo rate was forecast to be trimmed by another 25 points by end-June to 3.50%.