Big ticket late-stage technology funding deals have dominated India's startup ecosystem this year, propelling the average ticket size to a record high and even surpassing the average cheque sizes of the past two years cumulatively.

The average ticket size of late-stage technology funding deals was at $217.6 million in January-July this year, according to a report by industry body Indian Private Equity and Venture Capital Association (IVCA) and consulting firm EY. 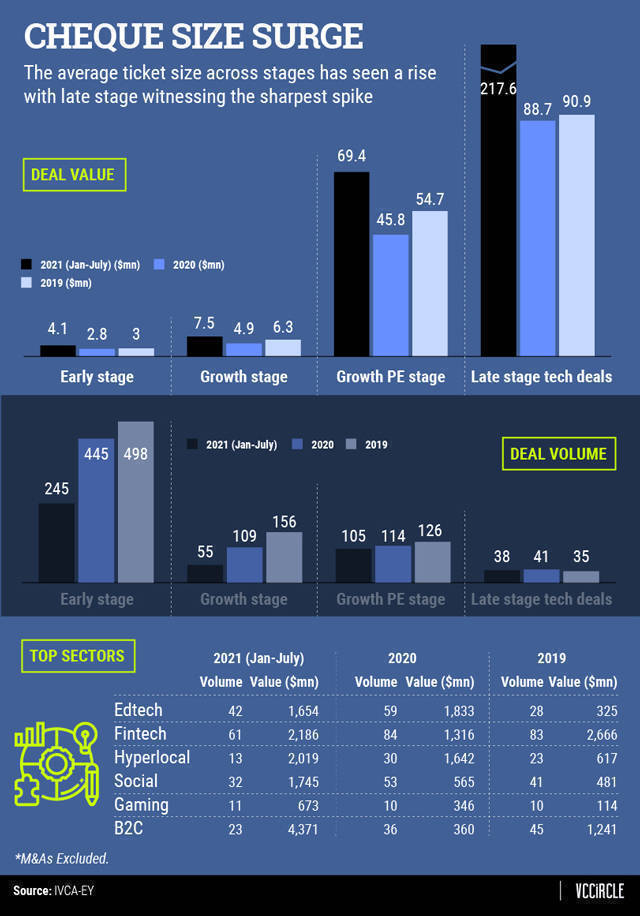 The sharp spike in the average ticket size of the late-stage technology deals signals the maturity of the startup ecosystem in India that has already produced 25 unicorns this year compared to 11 last year.

Unicorns are startups with a valuation of at least $1 billion such as PharmEasy, Moglix and Grofers that had entered this league this year.

Early-stage deals' average ticket size increased to $4.1 million this year as compared to $2.8 million last year, underscoring the rise in the risk appetite of early-stage investors.

Thanks to the substantial jump in the average ticket sizes this year, the overall venture capital funding has shot up to $17.2 billion in the first half of this year, compared to a total of $11.1 billion in the whole of last year.

Notably, the rise in total venture capital deal value also comes despite the ferocious and more fatal impact of the second wave of coronavirus pandemic this year.

However, in terms of the number of deals, the early-stage deals saw a significant dip of almost half at 245 till July this year as compared to 498 throughout 2019, the report added.

Karthik Reddy, vice chairman of IVCA, and managing partner of early-stage venture capital firm Blume Ventures, noted that 2021 has unfolded into one of the most unexpected and aggressive phases of consumer and business adoption of digital.

This spurred the urgency amongst entrepreneurs, and financial and strategic investors to rapidly double down on their digital forays, he explained.

In terms of individual sectors, fintech topped the chart with 61 deals, followed by edtech and social.

However, in terms of the deal value, the business to commerce (B2C) segment attracted the highest amount of funding at $4.37 billion, followed by fintech at $2.18 billion and hyperlocal at $1.74 billion.

Some of the big fintech deals this year include the Tiger Global-led funding round in BharatPe that propelled the merchant payments platform to the unicorn status, and the $160 million raised by Razorpay in April that tripled the company's valuation to $3 billion.

In the edtech space, market leader Byju's raised $1.5 billion in June alone at a valuation of $16.5 billion while its competitor Unacademy also raised more capital this year after turning into a unicorn in 2020.

In the social, B2C and hyperlocal space, ShareChat, Flipkart and Grofers have received significant funding this year.