Just one out of every four retail mall in India doing good business: JLL India

Retail commercial real estate business has been the most downbeat segment within the broader realty sector in India as it never recovered from the market meltdown after the go-go years of 2005-08. A new study has now revealed how deep the pain lies.

The troubled times for retail real estate market in India continues with as much as 160 malls performing average to poor out of a total of around 215 operational malls across top seven markets of India, according to a report released by real estate consultancy firm JLL.

The top markets that include Delhi NCR, Mumbai, Pune, Bangalore, Kolkata, Chennai and Hyderabad, have only 55 malls which qualify as good performers.

This in effect means that only one out of every four malls across India is successful.

Here's a look at city-wise comparison of successful vs average or poor performing malls.

The success factor of malls also depend on a host of factors like design and layout, the mall’s brand positioning, location and most importantly on their ability to transform themselves into family destinations rather than just remaining shopping centre plays, the JLL report says.

Delhi-NCR, by far, is the biggest mall market with 95 operational centres out of which just 12-13 malls are successful with a low average vacancy of around 10 per cent. However, as the report notes, Delhi-NCR is currently best placed for hosting successful, large-sized malls. 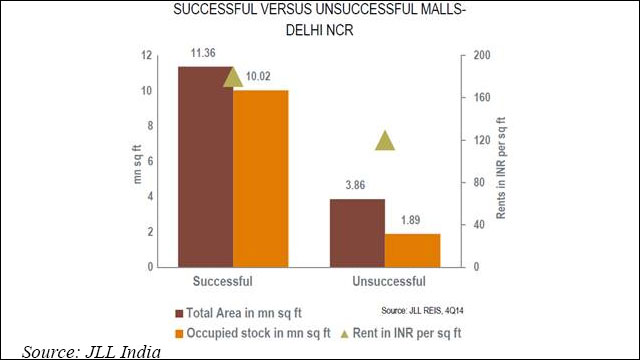 It suggests that an upcoming commercial and/or residential area in NCR will work best for building a mall and throws up examples of Noida and Greater Noida as best suited for such assets.