Is it really easier to do business in India?

The World Bank's latest report on the ease of doing business shows India jumped four places to 130 among 189 countries, but a closer scrutiny reveals the overall picture isn't actually rosy.

The annual publication rates countries on criteria such as starting a business and paying taxes, particularly for small and medium-sized businesses.

While the government is showcasing the latest report as a recognition of its efforts over the past year and a half to restore confidence in the economy, the country still lags behind most of its South Asian counterparts. India ranks 5th out of eight countries in the region.

In terms of indicators, the jump came mainly in terms of starting a business and getting an electricity connection. India's ranking slipped in terms of businesses getting credit and paying taxes. There was no change in five other parameters.

Even in the parameters where India has shown improvement, there is still a long way to go before the country can match global standards.

For instance, it takes almost a month in India to start a business. In Singapore, which topped the overall global ranking, businesses can start in just two-and-a-half days.

Similarly, it takes more than four months to get an electricity connection and almost double the time to get construction permits in Delhi, the World Bank report showed. 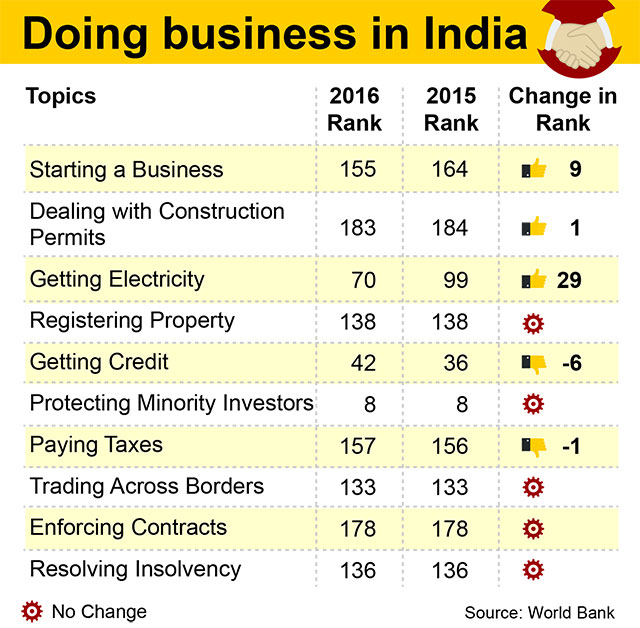 While the figures show the country in slightly better light, the report cannot certainly be taken as a gauge of overall performance as it covers only Mumbai and Delhi.