Indivision To Pick Up 50% Stake In Blue Foods 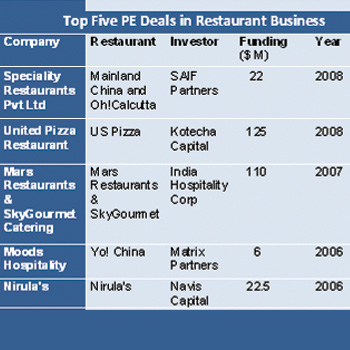 The Economic Times reports that Anil Ambani Group was also in contention for the restaurant business and had bid upwards of Rs 600 crore. Future Group's Pantaloon retail has a joint venture with Blue Foods called Pan Foods Solutions. The proposed deal, which is said to be finalised within next few weeks, would merge Blue Foods and Pan Foods and Indivision would pick up stake in that entity.

Blue Foods was established by Sunil Kapur of Copper Chimney, Sanjiv Chona of Cream Centre, and the promoters of Royal Sporting House of Singapore in 2002. The company operates through centralised kitchen in every city that sources and stocks all raw materials required for its various restaurants. Blue Foods also has a franchisee agreement with California-based Coffee Beans & Tea Leaf.

Indivision has made several investments in the food and beverages segment. It had picked up 33% stake in Mumbai-based processed foods company Capital Foods in 2006. Last year Indivision had picked up 20% stake in Sula Wines for Rs 50 crore ($12.5 million). There have been several deals in the reataurants space also. Earlier this year SAIF partners picked up a stake in Speciality Restaurants, which runs Mainland China and Oh! Calcutta for Rs 90 crore. Also Kotecha Capital invested Rs 500 crore in United Pizza Restaurant for 49% stake.