The Indian economy started the new financial year at a slow pace with the country losing the coveted position as the fastest growing major economy in the world. The economy grew 7 per cent in the three months ended June 30, after notching up 7.5 per cent growth in the fourth quarter of the last fiscal (January-March 2015) over the year-ago period.

Chinese economy beat forecasts to grow 7 per cent in Q2 of 2015 (Q1 of 2015-16), the same pace it grew in the preceding quarter when India overtook it to become the fastest growing major economy.

The growth in the first quarter of this fiscal, however, was better than the revised estimate of 6.6 per cent rise in Indian gross domestic product (GDP) in the third quarter ended December 31, 2014.

The slowing growth would be a jolt to the government which has been vociferous about notching 8 per cent growth this financial year. 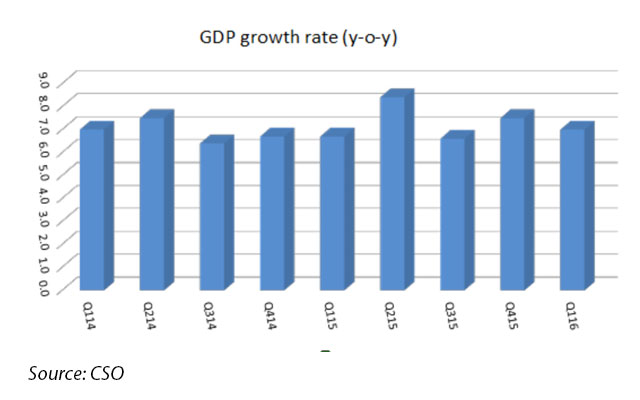 International rating agency Moody’s had last week revised India’s GDP growth estimated by 50 bps to 7 per cent for 2015-16 from its earlier estimate of 7.5 per cent.

A change in base year to 2011-12 along with a change in methodology earlier this year had significantly catapulted the growth estimates of Indian economy, even as other macroeconomic data showed the economy is struggling to come out of a slowdown.

Sectoral data showed that barring construction and a basket of services (trade, hotel, transport, communication and services related to broadcasting) all the other eight industrial categories sported slower increases in gross value added (GVA) compared with Q1 of FY 2014-15.

Overall GVA from economic activities increased 7.1 per cent over the last year compared with a 7.4 per cent rise in Q1 FY15.

Quarterly GVA at basic prices for ‘agriculture, forestry and fishing’ sector grew by 1.9 per cent compared with growth of 2.6 per cent in Q1 2014-15. This was due to lower production of rice, wheat, coarse cereals and pulses during  the  Rabi  season  of  agriculture year 2014-15 (which ended in June 2015). Among the commercial crops, the production of oilseeds declined by 17.6 per cent.

Meanwhile, GVA from ‘electricity, gas, water supply and other utility services’ sector saw deceleration growing 3.2 per cent compared with growth of 10.1 per cent in Q1 2014-15.

The same for the manufacturing sector slowed to 7.2 per cent against 8.4 per cent in Q1 of FY15.

Consumption to the rescue

While India has got fresh investment commitments from Foxconn and SoftBank announcing investments worth several billions of dollars in the country, the economy can reap its benefits only in the long run. With the bad track record of the government in implementing key reforms, it risks losing out on the investment intentions translating into growth in the near term.

Meanwhile, the index of eight core industries, which captures production in basic industries, rose at the slowest pace in three months in July. It rose just 1.1 per cent last month over the year-ago period, lower than 3 per cent rise in June and much slower than the six month high of 4.4 per cent growth recorded in May.

The cumulative growth for the index in the first four months of the fiscal slowed to 2.1 per cent.

The eight core industries are a lead indicator for industrial production comprising nearly 38 per cent of the weight of items included in the Index of Industrial Production (IIP).

"While the performance of the individual sectors was mixed in July 2015, the overall slowdown in core sector growth relative to the previous month is disappointing and does not augur well for overall industrial growth in that month," said Aditi Nayar, senior economist at rating agency ICRA.

The government will release IIP figures for July on September 11, 2015.

A tough road ahead for the government

The new macro-economic figures put the government in a difficult position as they fall well below official and market expectations. With the government back-tracking on the land acquisition norms that sought to attract companies to spend for infrastructure projects, it may soon see investor interest faltering. Already, global cues and concerns about corporate earnings have tripped the stock markets after they hit an all-time high early this year.

While the lower GDP growth figures, may force RBI to think harder and cut the policy rates further, it is unclear as to how much that can stimulate the economy given that banks have been slow in transmitting lower cost of borrowing to the consumers.

India has been portrayed by many as the bright spot in a cloudy global economy but a lot would depend on the government's ability to pass key legislation for India to remain as a preferred destination. The most critical test would be government's action plan to meet the deadline of April 2016 to implement Goods & Service Tax (GST).