Indian small and medium-sized companies are more optimistic about growth of the local and global economy in 2017 than their counterparts in many other countries, a recent survey by financial services firm American Express shows.

In India, 71% respondents feel optimistic about growth in the domestic economy in 2017 while only 3% are pessimistic.

“With a conducive policy framework and positive regulatory steps taken by the government, the SME sector has seen substantial growth. This survey clearly highlights the optimism and confidence among SMEs,” Saru Kaushal, vice president of global corporate payments at American Express India, said in a statement.

The survey also found that 76% of the Indian SMEs expected revenue growth of at least 4% in 2017. About 45% respondents said they expected profit growth of 8% a year by 2020. 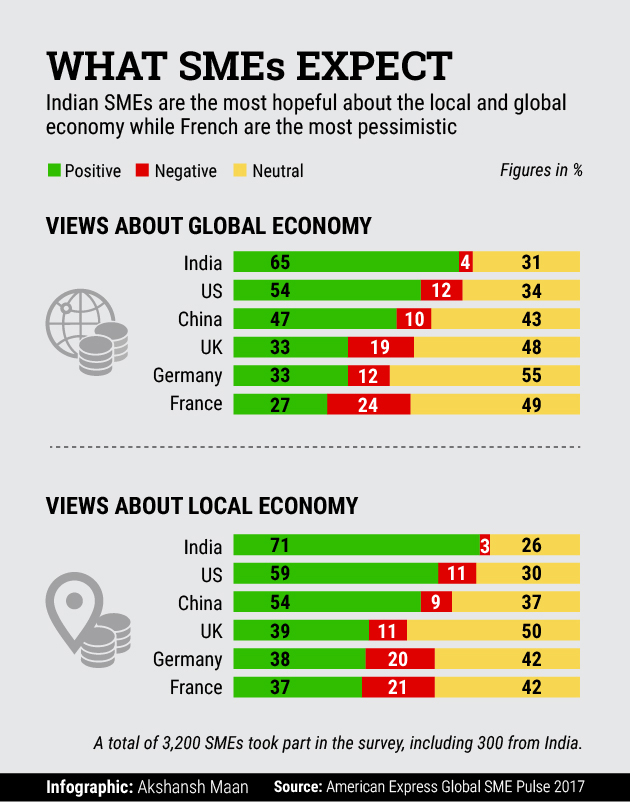 About 38% respondents feel that expansion into new domestic market segments will be their top priority in the next three years while 32% are looking for overseas expansion.

Growth in profit margin and revenue is the important long-term goal by the respondents.

The survey was carried out by Oxford Economics for American Express. About 3,205 respondents from 15 countries participated in the survey. This included 300 Indian companies with revenue of up to $90 million.