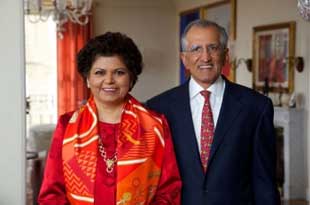 Ranjan Tandon and his wife, Chandrika

Indian-origin hedge fund manager Ranjan Tandon and his wife, Chandrika, have donated $100 million (Rs 652 crore) to New York University's School of Engineering in what is said to be the largest philanthropic gift by a member of the Indian-American community.

The school will be renamed the NYU Tandon School of Engineering, the NYU said in a press release on Monday.

The gift would support faculty hiring and academic programmes at the engineering department, which was recently restored to NYU after a 40-year absence when NYU merged with Polytechnic University in 2014.

The couple also gave a challenge to the university to raise an additional $50 million focused on scholarship aid.

“We feel privileged to be able to participate in the transformation that is happening at NYU and at the School of Engineering. As a Trustee of NYU, I have had a front row seat to the energy and excitement of the Global Network University and the scale of possibility it presents," said Chandrika, who is also a member of the Board of Overseers of NYU's business school.

American universities attract donations in billions of dollars. According to a report by the Council for Aid to Education, donations reached $38 billion in 2014 with Harvard University attracting the largest-ever donation of $350 million from the family of Hong Kong-based investor Gerald Chan.

An engineer by training, Ranjan started his career at Merrill Lynch & Co. after graduating from Harvard Business School. He is the founder of Libra Advisors, a hedge fund that is now a family office with around $2 billion in assets under management. The firm had picked up a 7.2 per cent stake in Rubicon, a New Zealand-based business developer in 2014.

Chandrika ,60, is an IIM Ahmedabad alumnus and sister of Pepsico Inc CEO Indra Nooyi. She had founded Tandon Capital Associates in 1992. Born in Chennai, she migrated to the US at the age of 24 and previously worked as a partner at McKinsey and Co. A musician, Chandrika has also released three albums till date. Her album Soul Call was nominated for a Grammy.

The couple have a daughter named Lita Priyanka Tandon, a Harvard MBA who got married a fortnight ago to James Ligtenberg, a law clerk for Justice Samuel A. Alito Jr of the US Supreme court, according to an NY Times column.