Index of eight core industry slips to lowest in a decade

Index of eight core industries, which captures production in basic sectors, slipped again in April to its lowest in a decade as growth slumped in five of the eight industries. 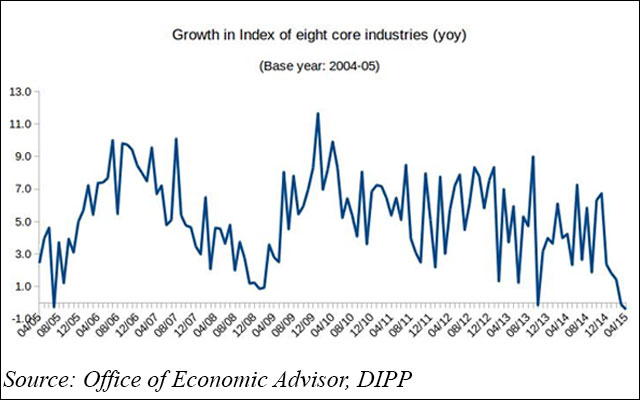 The index slipped further into the negative territory at (-) 0.4 per cent in April over the year-ago period after declining (-) 0.1 per cent in March, official government data show.

The eight core industries is a lead indicator for industrial production comprising nearly 38 per cent of the weight of items included in the Index of Industrial Production (IIP). There has been a divergence in trends for IIP and core industries with IIP rising despite a decline in core industries.

Of the eight sectors—coal, natural gas, petroleum refinery, fertilisers, steel, cement, electricity and crude oil—natural gas contracted the most (3.6 per cent) while coal increased 7.9 per cent over the last year.

Petroleum refinery production which accounts for 5.94 per cent weight in the core industries, also declined to its lowest level in over two years.

While the RBI is expected to slash rates in its June 2 policy review, many believe that it would have limited impact on the core industries sector.

"Monetary easing is unlikely to brighten the outlook for most core industries, the performance of which is afflicted by factors such as supply side constraints and lack of competitiveness with respect to imports," said Aditi Nayar, senior economist at ICRA.

Not right to drag all distressed companies into insolvency: SBI MD
Manufacturing

M&A Lab: Two years after AION-JSW takeover, is Monnet Ispat out of the furnace?
Finance