In Charts: How top NBFCs outpaced biggest banks by asset and profit growth

Last week, VCCircle analysed how India’s 11,500-odd non-banking finance companies have, in the past few years, capitalised on the Rs 10 trillion bad loan mess the banks are sitting on.

While we looked at the NBFC sector on an overall basis, just how well have some of India’s biggest non-bank lenders have performed vis-a-vis the largest banks?

To be sure, a like-to-like comparison is not possible since NBFCs often have a sectoral bent while banks usually lend across sectors. For instance, Housing Development Finance Corp (HDFC) focuses on home loans, while Shriram Transport Finance mainly offers auto loans. 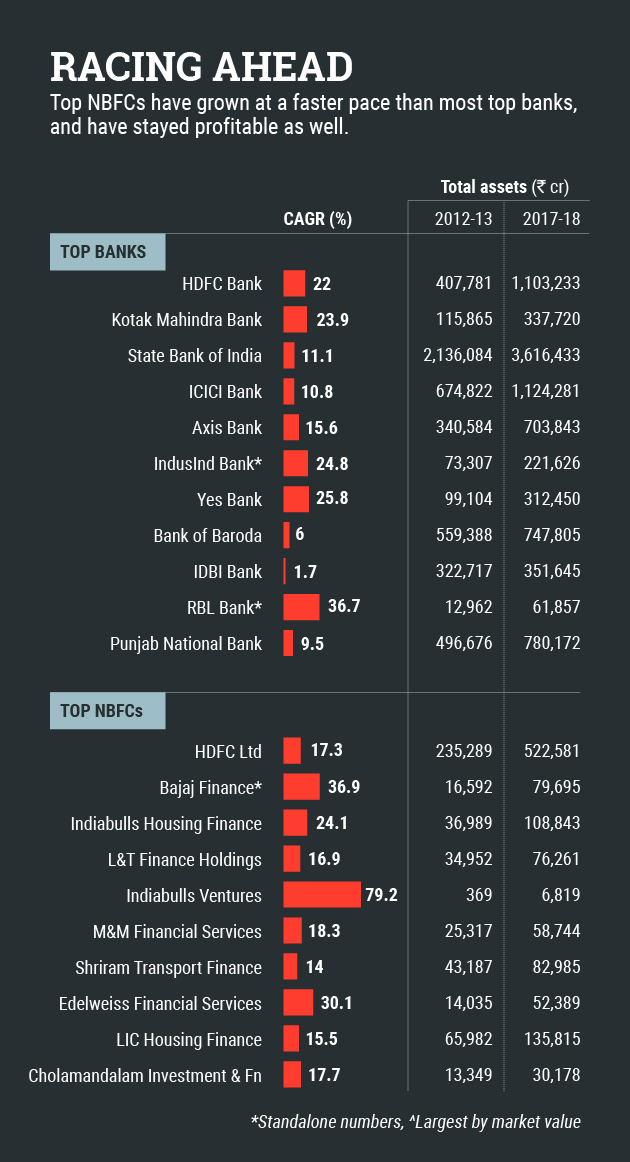 Yet, an analysis of the performance of the country’s largest NBFCs and the biggest banks does give a veritable idea of how the former may have eaten into the business of the latter, with whom they compete directly.

To gauge this, VCCircle drew up two separate lists–one comprising the 10 largest NBFCs by market capitalisation and the other of the top 10 banks. Then, we considered a five-year time horizon between the financial years 2012-13 and 2017-18, and looked at how their asset books grew on an annualised basis. In other words, we compared their compound annual growth rates (CAGR).

Separately, we also looked at how profitable, or not, these five years were for the aforementioned 10 banks and NBFCs to try and understand whether a bigger asset book has really translated into higher profits.

An analysis of the data shows that all the NBFCs on our list recorded double-digit CAGR. However, assets of at least three banks grew by less than 10% and of two others were barely above that mark.

Indiabulls Ventures was by far the fastest-growing NBFC and recorded a CAGR of almost 80%. The size of its asset book ballooned 18 times, from just under Rs 370 crore to more than Rs 6,800 crore.

Bajaj Finance, for instance, saw its assets grow almost 37% on a CAGR basis in the five years through March 2018 while Edelweiss Financial Services grew by more than 30%.

Even Indiabulls Housing Finance, a larger sister concern of Indiabulls Ventures, saw its assets swell by an impressive 24%.

Now, if one compares this with the largest listed banks, the contrast is clearly visible. Numbers show that only one among the top 10 listed banks–RBL Bank–actually saw its asset book grow by more than 30%.

But just like in the case of Indiabulls Ventures, RBL Bank started off with a much smaller asset base than its other peers. So, if one leaves RBL Bank out, only four other private-sector banks–HDFC Bank, Kotak Mahindra Bank, Indusind Bank and Yes Bank–have grown by more than 20% on a CAGR basis.

None of the state-run banks, which account for a bulk of the bad loans and banking assets, figure among the top five in the list of 10, nor do two other top private-sector lenders ICICI Bank and Axis Bank.

Clearly, the top NBFCs and even some private-sector banks have been grabbing a higher share of commercial and personal loans from government banks.

If one looks at profits, the contrast is even starker. Eight of the 10 NBFCs posted handsome growth in their profits before tax in the five years. However, at least four banks (all state-run) swung to losses as they struggled to manage the toxic debt sitting on their books.

Moreover, Axis Bank and ICICI Bank saw their consolidated profits decline significantly, with the former actually posting a Rs 2,189 crore loss for the January-March quarter of 2017-18.