How Samsung changed the game on Apple

The iPad is now 3 years old. Hard to believe we've only had tablets such a short time, given how common they have become. It's easy to forget that when launched almost all analysts thought the iPad was a toy that would be lucky to sell a few million units. Apple blew away that prediction in just a few months, as people demonstrated their lust for mobility. To date the iPad has sold 121million units - with an ongoing sales rate of nearly 20million per quarter.

Following very successful launches of the iPod (which transformed music from CDs to MP3) and iPhone (which turned everyone into smartphone users,) the iPad's transformation of personal technology made Apple look like an impenetrable juggernaut - practically untouchable by any competitor! The stock soared from $200/share to over $700/share, and Apple became the most valuable publicly traded company on any American exchange!

But things look very different now. Despite huge ongoing sales (iPad sales exceed Windows sales,) and a phenomenal $30B cash hoard ($100B if you include receivables) Apple's value has declined by 40%!

In the tech world, people tend to think competition is all about the product. Feature and functionality comparisons abound. And by that metric, no one has impacted Apple. After 3 years in development, Microsoft's much anticipated Surface has been a bust - selling only about 1.5million units in the first 6 months. Nobody has created a product capable of outright dethroning the i product series. Quite simply, there have been no "game changer" products that dramatically outperform Apple's.

But, any professor of introductory marketing will tell you that there are 4 P's in marketing: Product, Price, Place and Promotion. And understanding that simple lesson was the basis for the successful onslaught Samsung has waged upon Apple in 2012 and 2013.

Samsung did not change the game with technology or product. It has used the same Android starting point as most competitors for phones and tablets. It's products are comparable to Apple's - but not dramatically superior. And while they are cheaper, in most instances that has not been the reason people switched. Instead, Samsung changed the game by focusing on distribution and advertising! 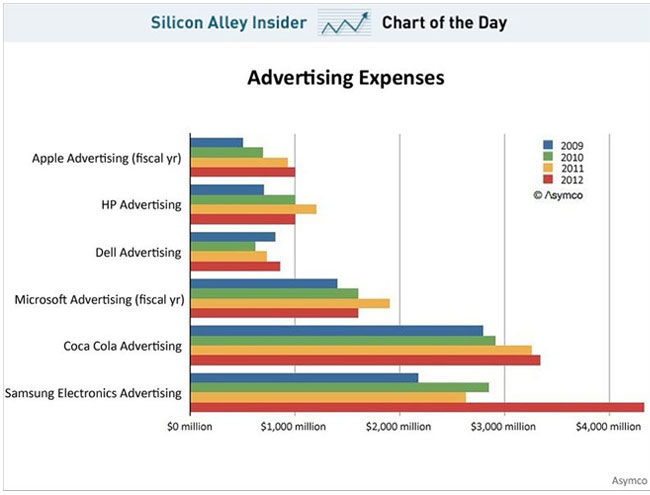 The remarkable insight from this chart is that Samsung is spending almost 4.5 times Apple - and $1B more than perennial consumer goods brand leader Coca-Cola on advertising! Simultaneously, Samsung has set up kiosks and stores in malls and retail locations all over America.

Can you imagine having the following conversation in your company in 2010?:

"As Vice President of Marketing I propose we take on the market leader not by having a superior product. We will change the game from features and function comparisons to availability and awareness. I intend to spend more than anyone in our industry on advertising - even more than Coke. And I will open so many information and sales locations that our products will be as available as Coke. We'll be everywhere. Our products may not be better, but they will be everywhere and everyone will know about them."

Samsung found Apple's Achilles heel. As Apple's revenues rose it did not keep its marketing growing. SG&A (Selling, General and Administrative) expense declined from 14% of revenues in 2006 to 5% in 2012; of course aiding its skyrocketing profits. And Apple continued to sell through its fairly limited distribution of Apple stores and network providers. Apple started to "milk" its hard won brand position, rather than intensify it.

Samsung took advantage of Apple's oversight. Samsung maintained its SG&A budget at 15% of revenues - even growing it to 24% for a brief time in 2009, before returning to 15%. As its revenues grew, advertising and distribution grew. Instead of looking back at its old ad budget in dollars, and maintaining that budget, Samsung allowed the budget to grow (to a huge number!) along with revenues.

And that's how Samsung changed the game on Apple. Once America's untouchable brand, the Apple brand has faltered. People now question Apple's sustainability. Some now recognize Apple is vulnerable, and think its best times are behind it. And it's all because Samsung ignored the industry lock-in to constantly focusing on product, and instead changed the game on Apple.

Something Microsoft should have thought about - but didn't.

Of course, Apple's profits are far, far higher than Samsung's. And Apple is still a great company, and a well regarded brand, with tremendous sales. There are ongoing rumors of a new iOS 7 operating system, an updated format for iPads, potentially a dramatically new iPhone and even an iTV. And Apple is not without great engineers, and a HUGE war chest which it could use on advertising and distribution to go heads up with Samsung.

But, at least for now, Samsung has demonstrated how a competitor can change the game on a market leader. Even a leader as successful and powerful as Apple. And Samsung's leaders deserve a lot of credit for seeing the opportunity - and seizing it!