Taking a leaf out of homegrown e-commerce majors Flipkart’s and Snapdeal’s journey so far, an Indian marketing analytics firm has quietly launched its e-tailing services in a nascent market.

The Noida-based company had formed a joint venture with handset maker Symphony to first enter Bangladesh in 2012. MoMagic, which uses its technology platform as a key tool to connect consumers with businesses, helped the local company market its products.

Subsequently, three years later, it decided to get into a 40-60 partnership with Symphony to launch its e-commerce arm. For the next few months  the company carried out on-ground surveys and market research to test the waters as the local payments market was still unstructured and the regulatory framework was yet to be formed. Finally, Pickaboo went live in May 2016. 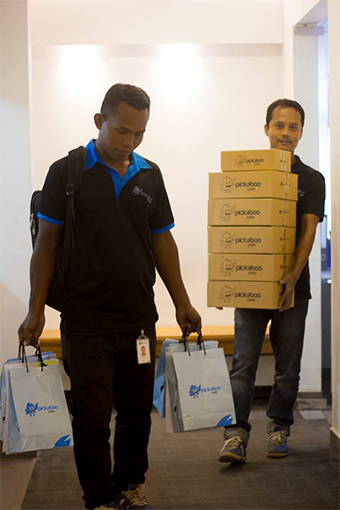 “We wanted to craft a similar success story in Bangladesh as we felt that it was about five years behind the India market. We realised that if we use our learning from the Indian experience, we will get the first-mover advantage there,” Gupta added.

According to Gupta, besides Symphony’s huge presence in the local market, Bangladesh’s growing mobile penetration and its clout in the use of mobile internet was a plus when it came to the decision of launching an online marketplace.

According to a 2015 report on mobile broadband users by International Telecommunication Union and UNESCO, Bangladesh was ranked 149th out of 189 countries, while India was at 155.

However, since the Bangladeshi buyer still has apprehensions about buying products online, the company is trying out different things to establish Pickaboo as a true marketplace.

Gupta says to enhance the evolving brand image of Pickaboo, the vendors are managed for quality control. It currently operates on a part-inventory and part-marketplace model, while it partners with local logistics companies for deliveries across the country, except Dhaka, where it has its own arrangements.

“We have to educate the consumer. Since they see Indian channels, they had some idea of how Amazon and Flipkart work, but did not know how to transact. When we started, 30-40% of all our orders were received through phone calls, instead of on the site. Many people picked up their orders from the office, because they were not sure of what to expect,” he added.

Over the past 14 months, Pickaboo has clocked an average gross merchandise value of $550,000-600,000, peaking to $800,000 during Eid in June. The average ticket price is between $125-130, and the number of prepaid orders is higher that most early-stage ecommerce ventures.

“Currently, 60-65% are cash-on-delivery orders, the rest is through banks. In Bangladesh, only the top bracket of consumers uses e-commerce, and the probability of them using cards is higher. That is one reason why CoD numbers are lower. Now that we have been accepted by the upper bracket, it is easier to gain acceptance from the lower brackets,” he said.

Gupta says that the company’s growth numbers are commensurate with the growth of the e-commerce ecosystem, which is about $3 million. Pickaboos’s closest competitor is Rocket Internet-backed Daraz.com, which, Gupta says, is not too far ahead, with a monthly GMV of about $900,000.

The company currently offers deals in only electronics and appliances, a common choice for any new e-commerce marketplace, while Daraz sells products across categories. “The Bangladeshi market is so new, that I do not think it is big enough to have a No.1 or a No. 2. We are still building the initial market, and there are hardly any other formidable players.”

MoMagic has committed to spend $2-3 million in the venture, and has already spent $1.5 million. The commerce firm is now looking to raise $10 million for expansion. While it burns $100,000-$120,000 every month, the company claims to have gross margins of 5-6% on every order, though net margins are in the red.

“Pickaboo will enter new verticals once it closes an investment round. Moreover, payments are not completely off the table,” he said, adding that the company may look at two kinds of expansions – either getting into other verticals, or into payments.

“It also depends on the kind of investors we get on board. It will depict how we expand. There are people who want us to do payments in Bangladesh. But the talks are still in a preliminary stage,” Gupta signed off.