How much is growth worth?

In my last post, I looked at the price being paid for growth by valuing the assets in place in a business. To make this judgment, I assumed that the business would pay its entire operating income to claim holders (as dividends to stockholders and interest expenses to lenders). The value of assets in place then becomes the value of the earnings in perpetuity, discounted back at the cost of capital.

Thus, a firm with a return on capital of 15% that wants to grow 3% a year will have to reinvest 20% (= 3%/15%) of its operating income back each year. Investors will thus get less in cash flows up front but have higher cash flows in future years.

Consider an example. A firm that generates $ 10 million in after-tax operating income, and has a cost of capital of 10%, will have a value of assets in place of $100 million, if it pursues a "no growth" policy:

If it decides to pursue a 3% growth rate and invest 20% of its after-tax income (based upon the return on capital of 15%), its value can be computed as follows:

The difference between the two values then becomes the value added by growth:

Determinants of the value of growth

If you accept the proposition that growth creates a trade off of lower cash flows today for higher ones in the future, you have the three ingredients that determine the value of growth. The first is the level of growth, with higher growth rates in the future generating higher earnings over time. The second is how long these high growth rates can be sustained before the company becomes too big to keep growing (at least at rates higher than that of the economy). The third and most critical is the return on capital you generate on new investments.

To see why the last ingredient is so critical, revisit the last example and make the return on capital = cost of capital. If you do so, the reinvestment rate has to be 30% to sustain the expected growth rate of 3%. The value of growth then becomes zero:

In fact, if the return on capital generated on new investments is less than the cost of capital, growth can destroy value.

Comparing the value of growth to the price paid for growth 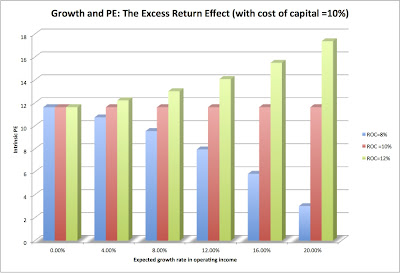 The PE ratio for just the assets in place is 11.63 and remains unchanged, even if you introduce growth, for a firm that earns its cost of capital. For the firm that generates a return on capital cost of capital, the PE ratio does increase (the growth premium) as growth increases. It is this premium that you would compare to what you actually pay to make a judgment on whether the added PE you are paying for growth is justified.

Using the spreadsheet on growth as a device for deconstructing growth (and its value), I looked at Microsoft, Kraft, Google and Linkedin. In the table below, I have listed my base assumptions for each company and the value of assets in place and expected growth in each one:

This table can be used to address several issues relating to growth:

Growth, in summary, does not yield itself easily to rules of thumb or broad generalizations. In some firms, it can be worth nothing, as is argued by strict value investors, whereas in others, it can be worth a great deal, lending credence to the arguments of growth investors.