How does India’s startup ecosystem compare with that of the US?
Advertisement

How does India’s startup ecosystem compare with that of the US?

But 2016 wasn’t a boom year for Indian startups. According to VCCEdge, the financial data and research platform of News Corp VCCircle, private equity investments in India fell 25 per cent from its peak of 1,752 deals in 2015 to 1,309 deals in 2016. Merger & acquisition (M&A) deals remained robust, at 1,002 deals worth $61.4 billion as against 995 deals worth $23.7 billion in 2015, though primarily because of a few large-value transactions.

India’s experience finds many parallels with the startup ecosystem in the United States, even as a few key differences explain why startup growth in both the countries varies. 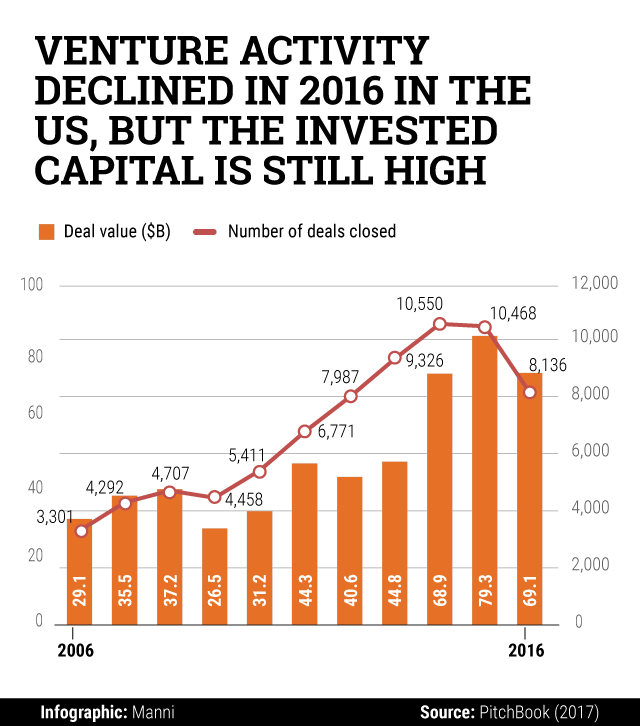 India witnessed a deep decline in venture activity across the board. Many Indian startups shut down their operations in 2016. Large numbers of startups were being founded in 2015, partly driven by the government’s promise of favourable tax norms, funding and policy support. Things changed in 2016 with fewer deals being sealed, indicating that venture capitalists and limited partners had become cautious. Venture capitalists placed more emphasis on unit economics, rather than hedging their bets on the number of customers, projections and valuation of a business. This resulted in a funding draught, sometimes leading to closure of startups.

In India, the market is correcting its mistakes

Indian startups, especially in sectors like ecommerce, face multiple challenges, right from operating in a highly competitive market to cultural resistance to ecommerce. While competition with global giants like Amazon and Uber has sparked cries for protection from Indian startups, the market has already seen consolidation, with one market leader emerging as the winner in many segments. The online real estate business, for example, has seen consolidation, with PropTiger acquiring Makaan and Housing in the last two years. In the US, too, 2016 saw a shift towards tried and trusted ways of investing. These developments are signs of a healthy economy that corrects its own mistakes.

India is nowhere closer to the US if measured in terms of the funding volume, or the number of startups, venture capitalists and angel investors that exist in the country. But it has come a long way. A Nasscom report estimates that India may have 11,500 startups by 2020, up from 4,200 startups today. India’s startup infrastructure is also growing rapidly, at 40 per cent every year. According to Niti Ayog and Tracxn, there are over 280 incubators, accelerators and co-working spaces in India. Still, India’s startup ecosystem has a long way to go. In 2014, according to Nasscom, India had only 300 angels, whereas US had 3,00,000 angels. In the same year, there were only 156 VCs in India, while there were over 1,300 VCs in the US. India has only 10 unicorn companies, though nearly one-sixth of the world population lives in India – the US has 98 unicorns.(According to the graph, India has only 7 unicorns, because the study was done in 2015)  This is a huge difference, but the difference is narrowing every year. In 2014, we had just about 3,100 startups, but in two years, this has grown by over 35 per cent to about 4,200. 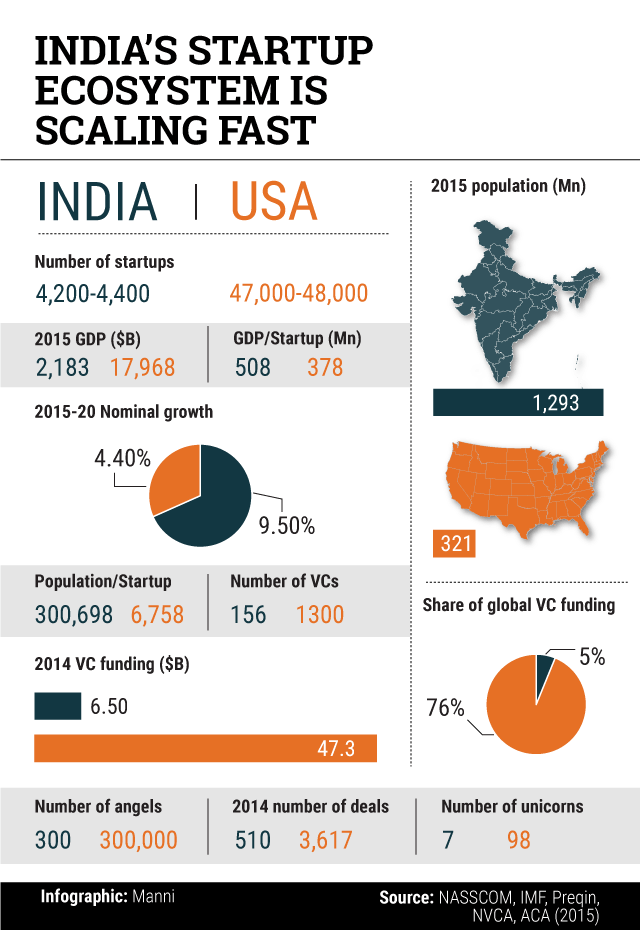 Policy uncertainty is the pain point for startups everywhere

When a woman was allegedly raped in an Uber cab, the Indian government asked states to ban app-based taxis in 2014. When radio taxis sought a ban on Uber and Ola in April 2016, the Bombay High Court asked the Maharashtra government to answer how private taxi aggregators operate as taxis with only a tourist permit.  The Delhi government is now planning to ban UberPOOL and Ola Share. Such policy decisions and regulatory pressures affect startups greatly, breeding indecision, confusion and chaos, and impacting business decisions.

Policy uncertainty and macroeconomic instability are more endemic in India where inflation was extremely high for much of its independent history. Even though the recent demonetisation decision of the Indian government has worked in favour of fintech startups, vagaries of policymaking are likely to make investors and startup founders wary. Indian companies with overseas debt, for example, are not adequately hedged against currency risk.

The policy environment in India has never been investment-friendly. For over 40 years, the Indian economy was largely socialist and entrepreneurs found the license raj a difficult barrier to break into. For a startup culture to thrive in India, policies that make it easy to start a company, and to enter and exit deals are important. The Indian government has removed many barriers to entrepreneurship and foreign investment since the 1980s, but the economy is still not liberalised enough. In the Fraser Institute’s The Economic Freedom of the World Report 2016, India’s rank was 112, while that of the US was 16. India’s rank in the World Bank’s Ease of Doing Business Index 2017is 130, out of 189 countries. A look into specific parameters paints a grimmer picture: India ranks 155 in the ease of starting a business, with an average of 14 procedures in Mumbai, when the OECD average is 4.8. The US’ performance is better, with a rank of 51, and an average of six procedures to start a business.

These rankings translate into stark practical realties on the ground. Venture capital firms in India tend to find limited partners (LPs) quite reluctant to invest due to difficult returns on investment. A number of VCs who invested in India’s unicorns haven’t so far profited from their investments. Limited Partners find it profitable to fund VCs only if they are free to exit from firms when the deal isn’t going good. But exits are costly and more difficult in India. In such an investment climate, it is normal that VCs are wary of making new investments.