The great reflation and the coming boom

Leaving aside domestic policy developments in India (which continue to be encouraging), the evolution of ultra-loose monetary policy in the West and the stabilisation of the Western economies points to a great reflation and potential boom in stock markets.

As we noted in our 7th Jan thematic, “…monetary policy in the West is likely to remain ultra-loose over CY13 as fiscal authorities would urge or force monetary bodies to compensate for the lack of fiscal support for the economy. In fact, the central banks in the Western World, in a meaningful deviation from the trend in the past two decades, experienced two profound changes in CY12. Firstly, this 12-month period saw governments explicitly declaring their intention to purge central banks of even mildly hawkish central bankers. Be it the Japanese Prime Minister’s open directive to the Bank of Japan’s (BoJ’s) Governor to mend his ways or be it the British Chancellor’s surprise decision to bring in the first non-British governor in the Bank’s 318-year history of the Bank of England (BoE), the broader theme is eerily identical (refer to Exhibit below) and has significant positive ramifications for equities in CY13.

Secondly, CY12 saw Western central banks beginning to officially abandon the traditional mandate of managing ‘economic growth and inflation’ in favour of ‘reviving economic growth alone’, as is evident from the Federal Reserve’s abandonment of the Taylor rule, the British Chancellor’s plan to scrap inflation targeting or the possibility of the BoJ doubling its inflation target.

Besides these two changes that signal an era of definitively dovish central banking in the West, the Big-4 central banks have explicitly indicated their decision to maintain an aggressively loose monetary policy stance in CY13 and beyond (refer to Exhibit below).”

The combination of unprecedented monetary stimulus (if you omit the six months post-Lehman, we have never seen central banks’ Balance Sheets expanding at the rate we are seeing at present) and economic stablisation in the West is creating the recipe for a boom in stockmarkets around the world. To quote the legendary economist John Taylor (he of the “Taylor Rule” which the central banks are now abandoning):

“…the new quantitative easing announcement [by the Fed] implies a gigantic increase in the size of the Fed’s balance sheet and thus effectively an amplification of the policy risks and uncertainty…The Fed now plans to purchase $85 billion a month of longer-term Treasury and mortgage backed securities until there is substantial improvement in the labor market, which requires a completely unprecedented increase in reserve balances…”

John Taylor goes on to argue (convincingly in my view) that the Fed is now aiming to set interest rates so low that it is likely to create boom akin to 2003-05 (i.e. the period when rates were “too low for too long” and thus fuelled a credit, economic and stockmarket boom).

With borrowing costs and energy costs for US companies now at all time lows and with labour in plentiful supply, the script for a US economic recovery is almost written. However, what does all of this mean for India? I will focus on four separate aspects of the incipient recovery in India: 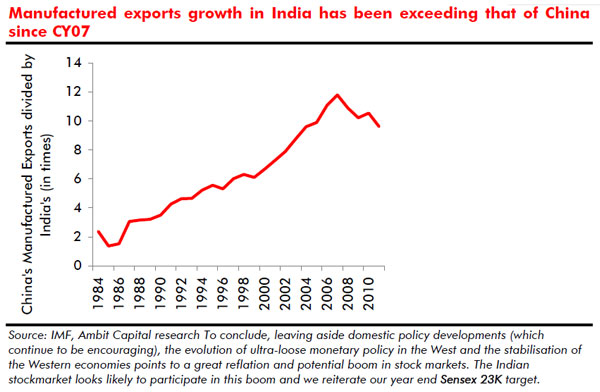 One final point, I have heard some other brokers say that because of the revival in the Chinese economy, FII flows into China could dampen flows into India. I find such an argument strange not because I doubt the veracity of the Chinese recovery (the recovery could be a figment of the Chinese authorities’ imagination but I will leave credible China watchers like Andy Xie to comment on that) but because it suggests that investors have a finite pot of capital to allocate to EM equities (and they allocate that pot of capital across various EMs). In reality, the bigger driver of flows into EMs is the allocations of funds between various asset classes: Bonds, Equities, Commodities, Real Estate, etc. From that perspective the ongoing rotation out of bonds (with US Govt and corporate  bond yields at record lows) and into Equities should result in all EMs experiencing significantly higher flows in CY13 than they saw in CY12.