The Indian government on Friday slashed corporate taxes in a bid to pump up the flagging fortunes of the economy, lifting investor sentiment but raising the spectre of expanding the fiscal deficit to the highest level in four years.

The government cut the corporate tax for all companies from 30% to 22%, finance minister Nirmala Sitharaman said. The effective rate after surcharges for companies that opt for new rates and forego exemptions would be 25.17%, and they will not attract any Minimum Alternate Tax (MAT).

Sitharaman said the government is providing an additional incentive for new manufacturing companies that skip exemptions as they would enjoy a tax rate of 15% and the effective rate at 17%.

The tax cuts and the other measures announced on Friday would shave off around Rs 1.45 trillion ($20.5 billion) from the tax kitty, the government said. 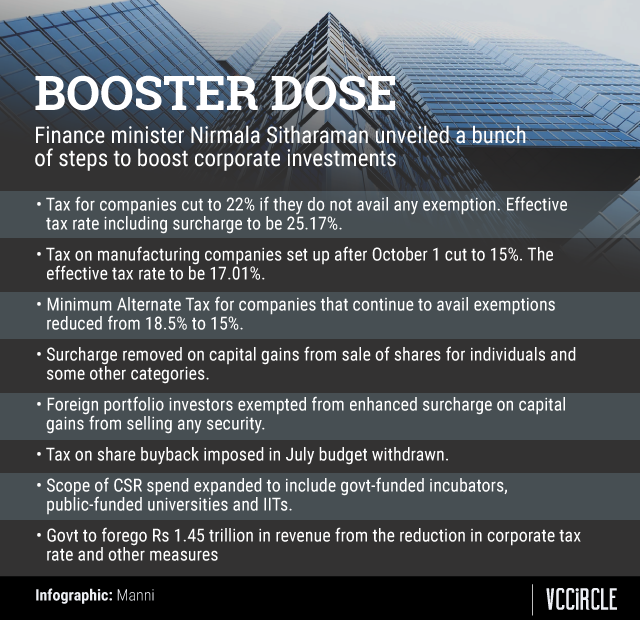 The tax cut will benefit profit-making companies of all sizes and especially those that are looking to commence domestic manufacturing in the short to medium term. In effect, it would push up earnings per share and boost returns for shareholders.

The announcement, which catapulted benchmark stock indices more than 5% to mark the highest single-day gain in a decade, was long overdue. Former finance minister Arun Jaitley, who passed away recently, had proposed in 2015 to cut corporate taxes from 30% to 25% over a four-year period.

The government had previously selectively cut corporate taxes for companies based on their size to incentivise smaller firms.

“The large reduction in corporate taxes across the spectrum is perhaps the boldest reform in the last 28 years,” said Rajnish Kumar, chairman of State Bank of India, the nation’s biggest lender.

He said that it will boost corporate earnings and facilitate a reduction in product prices. The move to lower taxes for manufacturing companies could also materially lead to India effectively integrating with the global supply chain and boost the government’s ‘Make in India’ campaign.

Industrialists, too, cheered the announcement.

Piramal Group chairman Ajay Piramal said the move signals that the government is listening to the industry. “We are certain that this big-bang reform will kick-start the economy. Surplus funds available to companies will be invested in capital expenditure and talent,” he said.

While the move is a surprise booster shot for India Inc, the big question mark facing Sitharaman is that she is trying to impact the supply side of the economy when the problem is believed to be more on the demand side.

Flagging demand because of weak consumer sentiment is widely believed to have led to the deceleration in economic growth, which slowed to a six-year low of just 5% in April-June quarter.

The slowdown threatens to exacerbate job losses, which may well weaken demand further. The government is betting on the tax cut being passed on by the companies through price reductions, thereby boosting demand. How much of the tax cut would be passed on to the end consumer and how effective would that be to lift sentiment will be clearer in coming months.

But the bigger problem area is fiscal math.

Ratings firm S&P Global said the tax cut was a “credit negative development” despite potentially boosting the economy as it will widen its fiscal deficit.

Dheeraj Singh, head of investments and fixed-income fund manager at Taurus Asset Management, said that the tax cuts are likely to put an upward pressure on the fiscal deficit and require a revision in the government’s borrowing target for the year.

“This would likely lead to an upward pressure on bond yields but this could get mitigated if the Reserve Bank of India chips in with an aggressive policy rate reduction,” Singh said.

The RBI last month cut interest rates for a fourth straight meeting in 2019, and governor Shaktikanta Das has already hinted at more reductions.

Bond yields shot up on Friday as the government is clearly poised to borrow more to meet the shortfall in tax revenue. The government had set a target of 3.3% for the fiscal deficit but this is now likely to be closer to 4%. Fortunately, this is still not in the danger zone though it would be a setback for the overall fiscal prudence by the central government.