The government on Friday lowered its growth forecast for this fiscal year, citing weak export demand and a deficient monsoon that hurt farm output, but said it will stick to its budget deficit target.

India’s gross domestic product is now estimated to grow 7-7.5 per cent in the year through March 2016 from 8.1-8.5 per cent predicted earlier, the government said in its mid-year economic review tabled in parliament.

The downward revision is in line with the projections of the central bank, international organisations and ratings firms. 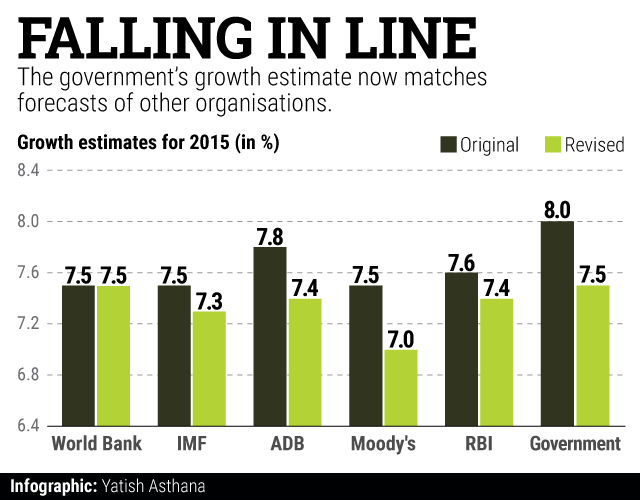 The International Monetary Fund and ratings firms had cut their forecast for the Indian economy by up to half a percentage points after data for the first-quarter economic expansion came out at the end of August.

At the time, the government had stuck to its budget estimate made in February. But the finance ministry hinted at lowering the estimate to 7.5 per cent after the release of second-quarter gross domestic product data last month.

The Reserve Bank of India estimates the economy would grow 7.4 per cent this fiscal year.

The economy grew 7.2 per cent in the April-September period of this fiscal year.

While the economy fared better in the second quarter given the push from manufacturing, there are still some mixed signals. The Nikkei India Business Activity Index for November showed private sector output inched towards stagnation as manufacturing activity slumped to a 25-month low.

With subdued demand weighing on factory activity, GDP growth for the next quarter may come in the lower end of the government’s range.

Also, with private investment still low and corporate earnings still muted, the economic cycle may not pick up as fast as the government expects it to.

The government also said that an anticipated shortfall in disinvestment receipts will add to fiscal challenge.

"Slower than anticipated nominal GDP growth will itself raise the deficit target by 0.2 per cent of GDP while the anticipated shortfall in disinvestment receipts, owing to adverse market conditions for a portfolio that largely comprises commodity stocks, will add to the challenge," the report said.

The government had targeted to raise Rs 69,500 crore through disinvestment this fiscal year. It has raised only Rs 12,700 crore so far this year, according to the website of the Department of Disinvestment.

With economic growth slower than expected and revenue from disinvestment falling far short of the target, the government could face difficulties in meeting its fiscal deficit target. A planned hike in wages of central government employees from January could make matters worse.

Minister of state for finance Jayant Sinha, however, said the government was confident of meeting the targets. "We will absolutely meet our fiscal consolidation roadmap," Sinha told reporters, according to a PTI report.

Chief economic advisor Arvind Subramaniam seemed more realistic and said that this year’s target will be met but next year looks more challenging.