Indian e-commerce majors are going all guns blazing with their marketing initiatives as the annual festive season sales are set to kick off on 20 September. Deep discounts and cash-backs, besides a large array of products will be on offer, as most players are looking to widen their respective customer bases.

Top gunners Flipkart and Amazon will have their Big Billion Days and Great Indian Festival Sale, respectively, between 20 and 24 September, while Shopclues’ Maha Bharat Diwali Sale will be a week-long event, starting 21 September. Paytm and Snapdeal are yet to finalise the dates.

According to a Redseer study, India’s e-commerce companies had generated gross sales of $2.2 billion (Rs 14,000 crore) during the 2016 festive season, while their estimated marketing budget was at Rs 500 crore – down from a whopping Rs 2,000 crore spent on advertisements by Flipkart, Amazon and Snapdeal in 2015. 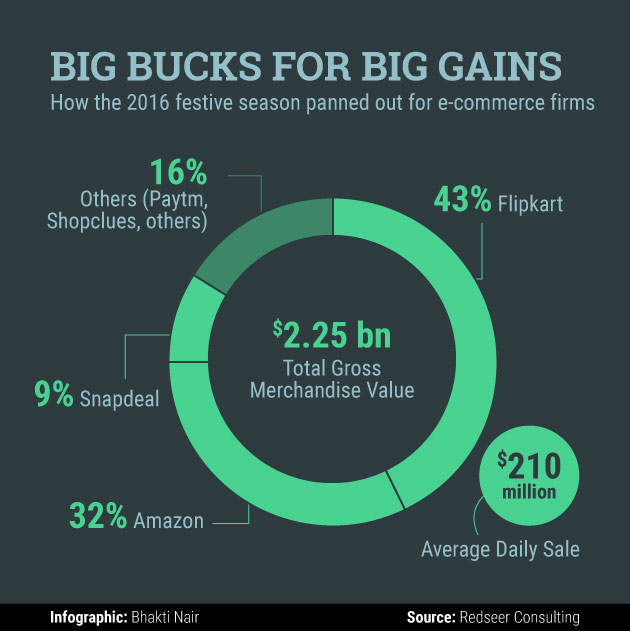 While 2016 was a year of cautious optimism following valuation markdowns, funding drought and subdued sentiments around the e-commerce ecosystem, the recent multi-billion dollar infusions in Flipkart and Paytm, besides Amazon’s well-stocked war chest, may prompt an increase in the marketing spends, this season.

Flipkart said it would offer up to 90% discounts on products across categories during the annual sale, while Amazon will look to promote its top-selling mobile phones after forging 140 exclusive tie-ups with manufacturers.

Besides, Amazon is also striving to break the dominance of the Flipkart-Myntra-Jabong combine in the fashion segment. “With over two million products, Amazon Fashion is the largest online fashion store in India,” a company spokesperson claimed. It has launched 50 brands since January and sees strong growth during the festivities.

“Our seller base has grown to over 225,000 – growth of 160% year-on-year. Overall, we have a selection of over 160-million-plus products across categories,” the Amazon spokesperson added.

Amazon and Flipkart are also banking on EMI schemes to double or triple their sales volumes. Flipkart is also offering a host of consumer financing programmes, such as no-cost EMIs, product exchange, buy back guarantee and buy now pay later, besides EMIs on debit cards for the first time ever.

ShopClues, which focusses on unbranded product categories to target the lower-end of the consumer-base, said it would offer a flat 50-80% discount on a wide range of products across home and kitchen, electronics and accessories, and fashion and lifestyle categories.

Harneet Singh, vice-president and, head, marketing, Shopclues, said it is also considering some exclusive launches in the smartphone category at a price point of Rs 3,000-5,000. “Lot of work has gone in over the past three to four months to get ready for this festive season. We are trying to focus on Tier-II and III towns as 50% of our business comes from there.”

The company will have its Diwali sales between 21 and 29 September, and the Diwali flea market sale during 7-11 October.

Paytm Mall, operated by Paytm Ecommerce Pvt. Ltd, is also not far behind, armed with a new version of its mobile app featuring 1,000 brand stores and 15,000 brand-authorised retailers selling over 65 million products.

Snapdeal, which had scaled down its operations significantly and pivoted to a pure-marketplace, has not disclosed its strategy. It also did not respond to the several attempts made by VCCircle to reach out to them.

However, according to a report by The Economic Times, which cited several people familiar with the company’s plans, Snapdeal is expected to have three or four festive season sales. Its first event of the season was hosted earlier this month, and the next is expected to go live in the last week of September.

Paytm has already announced a Rs 100-crore advertising budget, while Flipkart, which raised $3.8 billion in its latest round, has also launched an aggressive campaign.

“We are launching a robust marketing campaign, which will run across TV, print, radio, social, outdoors and digital media, including strategic alliances with online and offline partners,” Flipkart said.

Deep-pocketed Amazon is also not in a mood to go soft, but kept its cards close to the chest. “We do not comment on our marketing budgets, but we continue to work for the best ways to reach out to our customers with exciting, engaging and relevant campaigns.”

Shopclues said it will spend 35% of its annual marketing budget in these two months. “We are going to invest across TV, print, radio and digital across 20-25 cities, including top metros,” said Singh.

Snapdeal, which had carried out a Rs 200-crore marketing campaign, Unbox Zindagi, in 2016, has earmarked Rs 40-60 crore for the festive season, ET had reported quoting an unnamed company executive.

“Fundamentally, it is going to be a high-expenditure season for e-commerce players,” said Harish Bijoor, a brand strategy expert and founder of Harish BijoorConsults Inc.

The transformation of the commerce system from the physical market to digital, especially after demonetisation and the implementation of the Goods and Services Tax, you will see a lot of traction in this space. I think marketing budgets will bounce back. Post-GST, everyone is very hungry to grab on to whatever possible. So, we will see aggressive marketing this season.”

Mrigank Gutgutia of RedSeer Consulting, echoes similar views. “This year, we have a story from Paytm, which will go all out with Alibaba’s backing and it will be quite aggressive. This should push up the overall industry marketing spends on an average.”

However, Sam Balsara, chairman, Madison World, said the overall advertising spends by the e-commerce industry might not be substantial. “Budgets are likely to be higher than last year, individually, for the two major players, but not collectively for e-commerce.”

According to Gutgutia, Jio customers will play a significant role to influence online sales this season. “The upcoming sales will see much bigger impact of Jio consumers, who are the new lot of smart people ready to shop online, as they see lot of aggressive discounting.”

How Paytm Mall plays ball will, however, be the story of the season. It is already in direct competition with Shopclues, which has its focus on long-tail items. Considering it is funds flushed, and has the backing of Alibaba, its next move might surprise the market.

However, ShopClues’ Singh was rather dismissive: “It will take a lot of time for Paytm, as it executes the model on ground, and building logistics partnerships. We have built the network of 30-plus logistics partners to deliver across 30,000 pin codes over a long period of time. For someone to copy it overnight, will not be easy.”

Gutgutia of Redseer, too, did not seem very excited: “Paytm will probably be somewhere in between, as it tries to compete with the biggies. It will, of course, be hard to compete with them because of their exclusives, supply chain network, and five to 10 years of experience. It will take some time for Paytm to reach such huge scale.”

The sales strategy of smaller e-commerce players, such as LimeRoad, Craftsvilla and Voonik, may not influence the market as much.

“Typically, smaller players do not witness huge spikes during the festive season. They realise that the traffic will go to the bigger peers. So, they do not burn money because it is a game that they cannot win easily. They are usually well distributed throughout the year,” said Gutgutia.