After a dismal show towards the end of 2015, with manufacturing output falling to a 25-month low, factory activity data released on Monday exhibited some momentum propelled by the consumer goods sector.

Factory activity expanded in January with Nikkei Manufacturing Purchasing Managers' Index (PMI), which is compiled monthly by financial information services firm Markit, rising to a four-month high of 51.1 in January.

The index, previously known as HSBC Manufacturing PMI, measures the health of the manufacturing sector based on surveys of private sector companies—a reading below 50 signifies contraction.

Although production and new businesses registered mild increases following a contraction in December, it was the export sector that led to an improvement in sales demand.

a short-lived downturn recorded in December. Whereas the trends in the growth rates are relatively weak in comparison with the long-run series averages, January’s PMI data paint a brighter picture of the Indian economy,” said Pollyanna De Lima, economist at Markit. 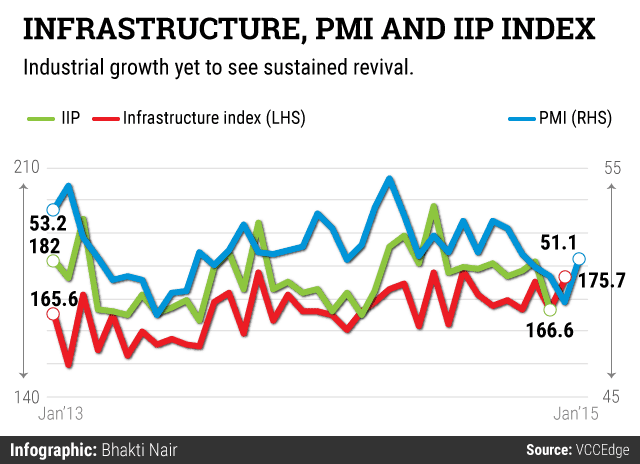 On the other hand, the Infrastructure Index, which represents 38 per cent of the Index of Industrial Production numbers, showed the core sector growth expanding to 0.9 per cent in December after a contraction in November helped by an uptick in production in coal, cement and electricity.

While many are banking on the success of the government’s ‘Make in India’ programme to kick-start growth in the fastest growing major economy, for now it would be influenced by RBI’s take on interest rates.

A poll of 15 economists conducted by VCCircle showed that while the central bank may not act immediately, RBI may cut rates after the budget once there is clarity on fiscal deficit and the inflation numbers.

Though 2015 has been a disappointment in terms of industrial growth, a revival of activity will depend on initiatives by the government and RBI. With tightening fiscal space, a cut in capital expenditure may not help industry reach its potential and may inhibit the government from targeting 8 per cent growth again.