Eye care has attracted maximum interest from private equity and venture capital players among single-specialty and home healthcare firms, besides clocking the maximum number of mergers and acquisitions, says a VCCEdge Healthcare report.

The report, which analysed 385 companies in the single specialty, home healthcare and multi-specialty space, including clinics, will be released during the VCCircle Healthcare Investment Summit 2017 in Mumbai on Monday 18 September.

According to the report, An Insight into Indian Healthcare Services, the segment has received $223 million (Rs 1,429 crore) across 14 transactions between April 2007 and March 2017. The median value of the deals was at 7.5 times the revenues, it added. 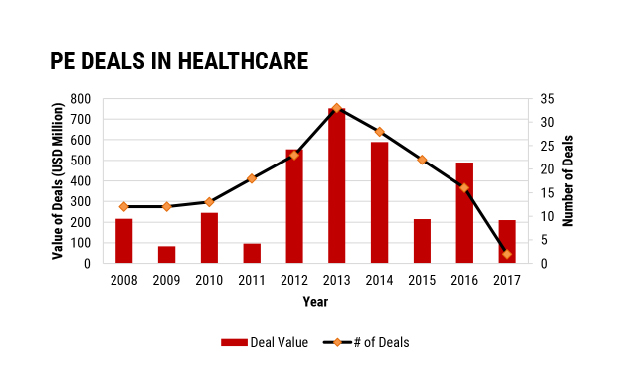 GIC topped the list of investors in this segment with a $100-million infusion into Vasan, followed by Hong Kong-based private equity firm ADV Partners with $45 million in Dr. Agarwal. In the third and fourth spot, respectively, were Matrix Partners India with $17 million in Centre for Sight, and Helion Ventures with $11.5 million in Eye-Q Vision.

Clinics, which typically operate as a single-speciality centre, were the next in line with a total deal value of $147 million across 12 deals, including two mergers and acquisitions.

“The median valuation for the 12 deals was 26 times the revenue, but the M&A transactions had a valuation of just 6.5 times,” the report noted.

Two major transactions in the segment were a $68-million infusion by International Finance Corporation in Apollo Clinics, and Columbia Pacific Advisors LLC’s investment in Wellspring.

Maternity and child care were next with an infusion of $130 million across 14 transactions. Cloudnine, which is backed by True North, Sequoia and Matrix Partners, had attracted $89.3 million.

True North’s $60 million in Cloudnine was the maximum by any investor, followed by CDC Group Plc’s $31.5 million in Rainbow Healthcare. 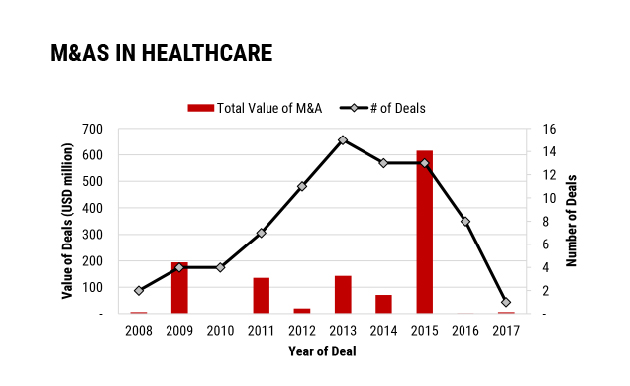 The in vitro fertilization segment had relatively fewer investment activities. However, the most prominent among them was that of Nova Medical Centers Pvt. Ltd, which received $75 million from Goldman Sachs, New Enterprise Associates and GTI Capital.

While the oncology space received $78 million across 28 transactions, home healthcare recorded investments of $51 million during the period under consideration. However, the recent infusion of money into Medwell Ventures and Health Care at Home should see a spike in the total value of investments.

Dental care saw peak investments between 2011 and 2015, clocking an estimated $43 million, with a median revenue multiple of 11.45.

The report provides a detailed break-up of each segment, besides an in-depth analysis of what the future holds in terms of investments and M&A activities. Other healthcare services, such as dermatology clinics, secondary care hospitals and tertiary care hospitals, also feature in it.