Madison India Capital, which picked a small stake in Micromax Informatics Ltd six years ago, is looking to hike its holding the country’s top home-grown handset maker, it is learnt.

The private equity firm that typically does small investments with a sweet spot of $5-20 million has the ability to sew deals worth $50 million, as per its website. However, this transaction could be bigger.

Madison India Capital that owns 0.4% stake in the handset maker is looking to pick another 2% stake in Micromax. 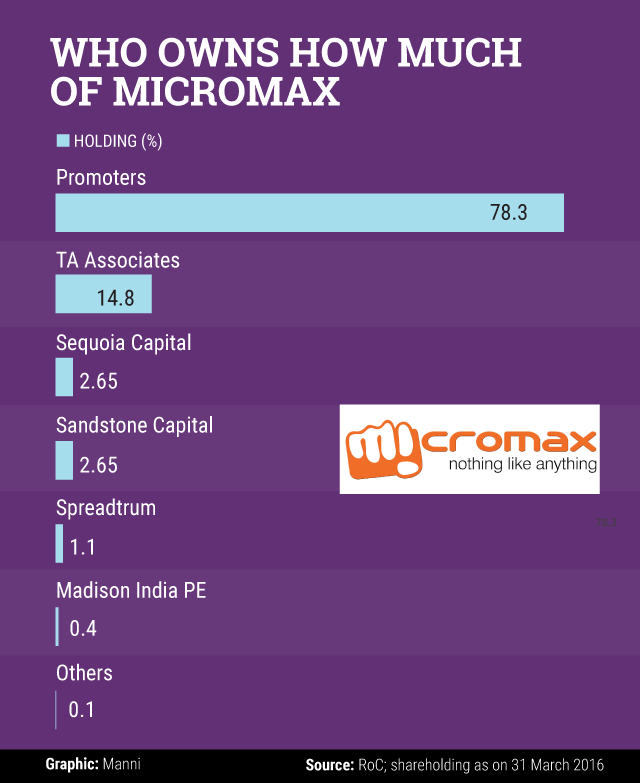 Last year, separate media reports said Micromax is in talks with Alibaba for selling a quarter of its equity stake in a deal that valued it somewhere between $3.5 billion and $5 billion (Rs 21,000-30,000 crore then). Based on that valuation the 2% stake would be valued at as much as $100 million.

Micromax is a profit making company and is unlikely to issue fresh shares in this deal, which would mean either one or all promoters are pruning their stake or one of the existing private equity and venture capital backers are part exiting in the proposed deal. Nearly 80% stake is held by four promoters – Rajesh Agarwal, Vikas Jain, Rahul Sharma and Sumeet Arora.

TA Associates, Sequoia Capital, Sandstone Capital and Spreadtrum are other key shareholders of the firm. TA Associates is the lead PE investor having bet $45 million seven years ago. Half of this investment was through share purchase from co-promoters.

Either ways, if the deal is struck at around $50 million level, then it would value Micromax at much more modest $2.5 billion (Rs 16,750 crore).

Micromax was valued at around Rs 5,000 crore ($1 billion then) when it last raised capital from China’s fabless semiconductor firm Spreadtrum four years ago.

Over time, the private investors put together had shelled out close to $100 million to buy shares of the firm. However, bulk of the money went to promoters who sold their shares. The company also planned an IPO but later withdrew its public offering, citing weak market conditions.

The technology space at large has been rerated by investors after valuations touched never before levels last year. Top home-grown internet firms like Flipkart, Snapdeal and Ola have seen their investors knock down their valuations. Although Micromax is not an internet firm, it has been facing headwinds.

According to IT industry research firm IDC, Micromax has slipped to the number three spot in terms of market share of handsets sold in the July-September 2016 quarter, behind Samsung (23%) and Lenovo (9.6% along with Motorola) .

“The vendor (Micromax) is facing tremendous pressure from other local vendors in sub-$100 segment and Chinese players in $100-150,” as per the report released earlier today.

Micromax has also seen a slew of top level exits over the past one year. The company’s CEO Vineet Taneja, who was hired from Samsung, quit in less than two years after taking over the reins of the firm. The company’s CFO Badal Bagri also quit last December. Last year, former Airtel India CEO Sanjay Kapoor had stepped down as the firm’s chairman over a dispute with the promoters of Micromax.

According to a report this week in The Economic Times that cited the company’s filings with the Registrar of Companies, its sales declined 6% to Rs 9,825 crore. The company’s spokesperson had clarified, however, that the data do not include sales from its premium brand YU and international revenues.

Over the past few years, Micromax has diversified beyond handsets and now also sells consumer electronics products such as LED televisions and air conditioners. However, these product categories typically involve less frequent consumer purchases compared to mobile handsets.