As the dynamics of air travel is changing with more and more airlines finding themselves stuck on the tarmac, the online travel ticketing business is going through some belt-tightening. Cleartrip, an online travel portal, has started laying off people over the past couple of months. While industry sources suggest that the venture funded company has issued pink slips to some 70 employees, the company has confirmed to VCCircle that it has indeed laid off 42. This is about 15 per cent of their total staff of 300. 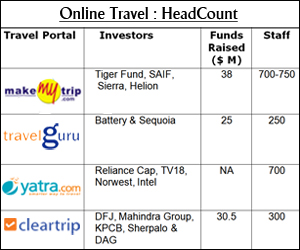 Cleartrip's CEO Stuart Crighton told VC Circle that while 10 people have been laid off in the call center, the others have been laid off across various sections. "I think any responsible organisation needs to make sure that they are competitively staffed. I will continue to keep an eye on the business and continue to make sure that we focus on our core strategy and we are staffed appropriately to do that," said Crighton.

Crighton, who is a co-founder of Cleartrip, has now taken over as the CEO from Sandeep Murthy. Crighton was till now the COO of Cleartrip. Murthy, a representative of Sherpalo Ventures and Kleiner Perkins Caufield & Byers, has become the Chairman. Murthy has been officiating as the CEO since the company kicked off in late 2005.

Crighton said that Cleartrip has had a very low attrition and had absorbed a lot of headcount over the last two years. As part of its cost cutting exercise, Cleartrip is also planning to spend money more judiciously for its marketing and capital expenditure. Cleartrip recently raised funding from DFJ and has in the past raised money from Mahindra Group, Kleiner Perkins Caufield & Byers, Sherpalo Ventures and DAG Ventures, totalling more than $30 million.

Even though Cleartrip admitted the problems in OTA business as a result of high aviation fuel prices and spiralling tariffs, the other online travel agents painted a-not-so-gloomy-picture. Deep Kalra, CEO of MakeMyTrip.com, arguably India's largest OTA, said that they are hiring people and not sacking at the moment.

Kalra told VCCircle that they are adding at least 10-15 people to their workforce every month. As of now the company employs about 700-750 people all across India. This includes about 250 people in offline business. They have 22 offline centres across India.

Ditto Yatra.com, another leading travel portal. However, OTAs are streamlining their marketing spend. "We are continuing to optimise our marketing expenditure," said Dhruv Shringhi, CEO, Yatra. "Also we will keep on hiring more people over the next few months as we continue to open more offices," he added.

Travelguru, which is focused on hotels and holidays, gets around 10% of its revenues from air travel business. But being in travel business it has seen a drop of about 10-15% in flight sales and about 10% in hotel demand.

"We are adjusting marketing expenditure, in non-ROI marketing, and taking smart calls on non-core area expenditure at this stage," said an offical from Travelguru. It has also cut some staff in non-performance businesses or its non-core focus areas.

While cutting costs by laying off staff is one part of its strategy to deal with the slowdown, Cleartrip is now also focusing on efficient resource allocation. "We are spending a lot of time in making sure that every marketing dollar is linked to a transaction," said Crighton. Marketing comprises bulk of Cleartrip's expenditure, contributing to 40% of  its annual spend.

"It's not about cutting marketing expenditure but making sure money is used productively," explained Crighton. "I think we need to continue expanding our market share especially in other parts of India where we are not as strong as we are in west and south," he added.

"All the travel portals in India today to a large degree are very dependent on their model as an intermediary between airlines and customers," said Crighton. Only 10% of Cleartrip's business is non-air, while the balance is from air related businesses. The current slowdown has reduced Cleartrip's revenues by 10%.

To counter the dependency on the domestic online product, the firm has revamped its hotels product and has formed a partnership with TripAdvisor . The company has also recently rolled out its insurance product and international airline booking product.

"We are reducing the core dependency from the domestic airline product. The uptake from the new products has been pretty exciting. This offsets the decline on the core domestic product," said Crighton. Now Cleartrip plans to expand its focus on non-air products and is upbeat about online railway booking. Cleartrip is also expecting to reach profitability by end of this financial year. It registered a turnover of Rs 700 crore (gross merchandise revenues) in the last financial year.

On Online Travel Market In India

The online travel market in India is a very competitive and crowded with the likes of MakeMyTrip, Yatra, Cleartrip and Travelguru. Also big international players like Expedia and Travelocity have entered the Indian market. "They would be planning some customisation and Indianisation of their strategy because there is no clear cut global strategy that you can apply to India," said Shringhi.

It's also time for consolidation in the industry. "I also think that time is getting closer when some consolidation may make sense and that could come in many forms," said Crighton. "But there is no urgency at this point to seek any kind of a deal and we are confident in the way we are deploying our resources," he added. "I don't see any consolidation happening this year but may be we can see something happening next year," said Shringhi of Yatra.