AskMyGift, a mobile app that allows users to create a personalised wish list for gifts, has raised an undisclosed amount in angel funding from early-stage angel fund Turning Ideas. 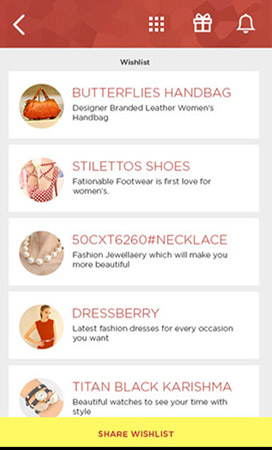 The app allows users to share their gift wish lists

Futuregifting Eventures Pvt Ltd, the Noida-based company that operates AskMyGift, will use the money to tie up with brick-and-mortar gift stores in the Delhi-NCR region and on marketing, its founder Sumeet Aggarwal said.

“AskMyGift’s idea is to enable users to come up with a unified gift registry where they post what they want – it can be a product, a service or even a moment,” said Aggarwal.

The AskMyGift app also enables users to share their gift wish lists across social networks and contacts. For instance, if a user wants to be gifted a designer t-shirt on his/her birthday, he/she can share size preferences. Users can also share pictures of items they spotted offline for gifting purposes.

AskMyGift has tie-ups with Flipkart, PepperFry, Ferns & Petals and other online ventures from which gifts can be bought.

The app, which intends to raise about Rs 2 crore ($300,000) from VC firms, was launched three months ago. Aggarwal said a survey prior to launch revealed that 78 per cent respondents had received irrelevant gifts at some point in time.

“For example, the top gifting options for an anniversary are dinner sets, wall clocks and bed covers. People receiving them admitted that most gifts were never used and that they passed those on as gifts to someone else,” said Aggarwal, who has worked with Tata Consultancy Services before.

Ashish Mittal, co-founder and chief mentor at Turning Ideas, said AskMyGift allows users to do away with gifts that make little sense to them. For the stores, it is a great way to have an omni-channel presence and increase sales at no extra cost, he said.

Turning Ideas had recently participated in an angel funding round at Delhi-based startup Inweone Technologies Pvt Ltd, which has developed Zeppery, an app that allows users to pre-order food at restaurants and other food outlets.

The online gifting market in India is estimated to be worth $500 million (over Rs 3,000 crore) and is projected to treble over the next two years. However, not many deals have happened in this segment of late.