Eight things that will change for startups in 2016

A health scare can put your entire existence into perspective. When mortality attempts to look you in the eye, it often compels people to make drastic changes to how they live. That is why scares are almost always blessings.

For Indian Internet startups, 2015 was one of those years when mortality gave them a good stare. That said, there is no bubble in India yet—not anytime soon.

When looked at from 30,000 feet, India is a thriving consumer Internet market that has leapfrogged the desktop and gone straight to smartphones. That is a game-changer. If eighty five per cent of Internet users in India are on mobile, it means they are always connected and always available to do business.

And with China out of bounds for non-Chinese players, India is the largest “accessible" consumer Internet market in the world. The Chinese and Americans are at war in India. At stake are millions of democratic and 4G-ready consumers with thousands of aspiring engineers ready to code a new reality.

Now you know why our friends at Facebook and its partner telecom operators want to give away Internet access to millions of Indians in return for imprisonment in their walled gardens.

Imagine this for a moment: Walk into a boardroom and say, “I will make available 400 million middle-class Internet users, with access to 3G and 4G connected smartphones for less than $50 billion.” Think of the uproar it can create on the casino table that is the Internet.

That is why everybody wants India. Money will continue to pour in, faster. But the shocks of 2015 will reverberate.

That said, the landscape and mindsets have altered permanently. Why? 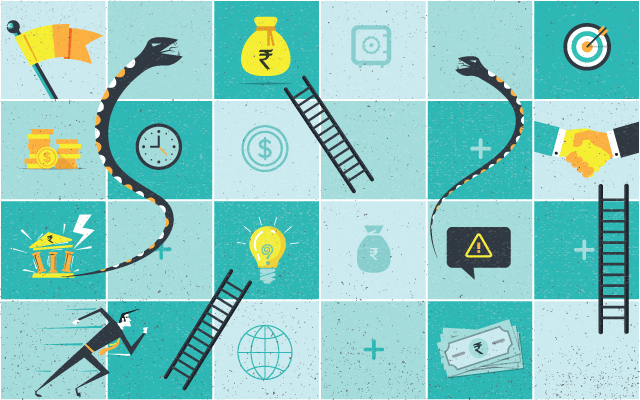 1. Bloated they are, burst they shall

Only when you turn off the tap do you discover how badly your bucket leaks.

The bubble is within Indian startups. Startups are living beyond their means, in markets that can’t afford their overheads.

"We've moved” got to become the most dangerous mail to come from a startup founder. Some have built sprawling offices, thousands of employees, multitudes of benefits, splashes on front pages and meaningless announcements.

Their lifestyle is headed for a chilling downgrade. These folks forgot they are in wafer-thin margin businesses, with little protection from western players.

You can see it play out in e-commerce. I’m willing to bet Amazon will take less than half the money and half the time to hit the top of our league tables in e-commerce. Ditto for the on-demand cabs market. Wherever there are Indian startups with bloat, a lean player will steadily eat their lunch.

Adjusting to a frugal lifestyle is brutal. For a young startup to go through downsizing and keep morale, vision and energy intact is tougher still. Some will just die after multiple rounds of surgery, others will survive and become lean, sharp companies.

We will see more blood on the streets in 2016 as the unwieldy ones continue to be culled.

2. Part II of the battle begins

From 2007 to 2015, it was all about mega-funding and mega-announcements. When looked at from a Game Theory perspective, it worked. Several folks lost their nerve and walked away from the last-man-standing game. The weaker got weeded out.

The battle has now narrowed to a handful of startups in most segments. The long slog of business building—the battle for capital efficiency, innovation and customer experience—starts now.

In traditional online markets, players that hurt each other with discounts and deals will settle into some kind of equilibrium. At least until investors trigger consolidation and create firms with a dominant market share. That's the only way to make some real cash in the Internet economy. We are seeing that play out in China and the early signs are visible in India.

In long-gestation segments where bets are based on future (hope driven?) unit economics or where complexity rises along with scale—like O2O businesses, hyperlocal services and e-grocers—investors with balance sheet money will play. Regular VCs with a five- to seven-year horizon will sell out and retreat to safer ground. That means SaaS and enterprise-tech startups.

Good money will not follow bad as easily as it did before, unless savvy investors can foresee a Chinese or American buyer ready to make a strategic investment. In that case, the bets will continue as part of larger plan to dominate India’s Internet landscape.

Hot money will continue to pour into new segments where disruption is obvious. Newer ideas, “Indian” ideas will get funded. Funding will follow friction.

And there is no shortage of friction in the Indian economy. For example, Indian banks are sitting on a time bomb. The inter-city trucking market is broken. Education is massively fragmented. The sharing economy can unlock our potential.

3. Creativity will triumph over full-page ads

Mobiles will become the hub of audience acquisition. If your audience is already available and connected, why do you need to step out of the medium? And word of mouth is inexpensive, isn’t it?

Video will start playing a bigger role. Video trumps the language barrier, is easy to consume and to educate consumers. 4G will drive home the point that video is the most potent tool to reach Indian masses in their own language and it will set the ground for visual reality and augmented reality-based interactions in the next few years.

It’s unfortunate that the system needed a shock. But we will see some of the best creative ideas from startups in 2016.

4. Dry powder will be used carefully

Indian VCs are sitting on massive amounts of dry powder. However, they will now be circumspect. The days of a 20-year-old dropout walking into your office and walking out with two million dollars are over.

VCs will do fewer deals and rounds will be smaller. Series B will be the new Series C. We may also see informal clubs of VCs. Silicon Valley-style networking and sharing will become the new order as the frenzy to compete on deals dies down.

Investors will have meaningful conversations with founders and bring on experienced advisors. Metrics (the A16z kind or the ones I wrote about here) will be examined. A CFO and/or a business analyst will be one of the first hires a VC will expect after a Series A.

5. A new breed of Internet entrepreneurs

We will herald the entry of the 35-year-old Internet entrepreneur. VCs will readily fund this new founding fuel—less adrenaline, more experience.

These founders will know how much cash they have in the bank. They will know their costs and how much they burn—a change from what we’ve seen until now. Entrepreneurs who failed in their first attempt have learnt their lessons. “Burn rate” will not be a matter of pride for the poster boys.

Maverick founders will be the exception rather than the rule. And they’ll maintain a low profile as raising funds won’t be confused for success.

Hiring talent will be tougher. The smart talent will think hard before joining a startup. Between the questions a startup entrepreneur will face from his investors and potential hires, his vision and execution plan will get tested. And that’s a good thing.

6. The media will no longer get wide-eyed about everything

Headlines will head back to where they matter—the real economy, which sputters along shakily. Does India really need, and more pertinently, can it afford a bullet train? Do our GDP numbers reflect the reality? Of course, startup stories will continue to fascinate. But they’ll be balanced by stories of failures.

It’ll no longer be fashionable to repeat “mobile first” ad nauseam. We know the smartphone is in everybody’s hand. We know there are a billion mobile users in India. If anything, the pendulum swung too far with startups declining service to customers who did not use their mobile app. Sense finally prevailed. The media will learn to ignore such pronouncements and focus on the real impact of the mobile revolution.

Every offline company talks digital today. But they will discover that consumer Internet is not a battle for cubicle-ridden hierarchical companies. Some will recognize that fighting a bunch of fiercely competitive and nimble youngsters is not easy and transformation is too expensive and risky.

Either they need to acquire startups or spin out their Internet arms. “Experimenting” is likely to fail. Going “digital” or retrofitting “omni-channel” to your essentially offline DNA is not a plan.

It is amazing Jabong doesn’t seem to have an offline suitor yet. Just the sheer top-of-mind recall plus the consumer intelligence and native learning’s from Jabong will take years for an offline player to assimilate. Why would anyone want to start out, make mistakes and learn the hard way, if the price isn’t too high?

Regulators will come to terms with the technology and smartphone tsunami, and realise it’s not worth protecting the incumbents. Their job is to allow and encourage the efficiencies that data-driven businesses create. The context and direction of regulation will have to change. The RBI, IRDA and other regulators will begin clearing regulatory hurdles for data-driven businesses and create new frameworks in 2016.

The New Year will see payment banks come on-stream. Several fin-tech and payment companies may die but the payments ecosystem is headed in one direction. Cashless. It will be transformative for business models that survive on micro-payments and give birth to new ones.

The Chinese trio of BAT (Baidu, Alibaba and Tencent) will close in on some more targets and bite off chunks of the Indian Internet market. If so, a new deep-pocket war will start in these segments. There will be more damage to offline players and startups that get left out of the Chinese invasion.

Equally, the western players might want to play a different game here. They missed the China bus – but cannot afford to miss this one. Don’t be surprised if Google, Facebook and their ilk step out of their core and invest in unrelated unicorns (even e-commerce!). Why stick to only a pure messenger like WhatsApp, when the WeChat “ecosystem” opportunity is lying wide open in India.

In 2015, we learnt lessons from poor decisions, poor oversight and poor execution. In 2016, we will see examples of greatness, and some solid unicorns, not paper tigers.

The author is a partner at India Value Fund Advisors and a former group CEO at Network 18. Views are personal.