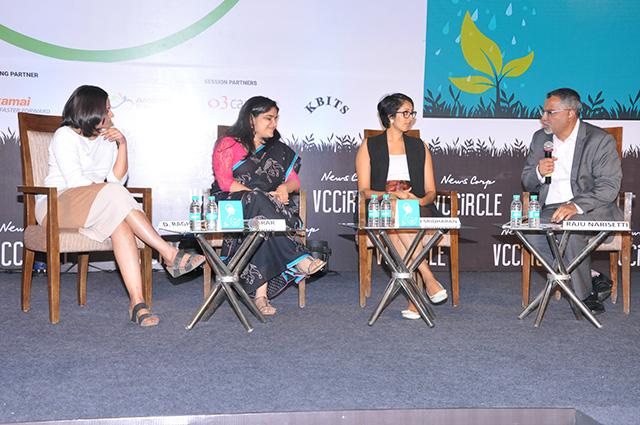 Visualise your future and be your own role model. This was the message from a group of successful women entrepreneurs to their contemporaries at the Techcircle Startup 2016 summit that kicked off in Bangalore on Thursday.

At a panel discussion on ‘Women Entrepreneurship and Startups: Will women lead the next set of unicorns?’ moderated by Raju Narisetti, senior vice president, strategy, News Corp (the parent of VCCircle), panellists agreed that in an ecosystem dominated by men, women would have to be their own role models.

“Today’s generation has a better understanding of the social barriers for women and that is really empowering them. If we have to understand and make a difference to the lives of women, we have to be honest about the numbers with regards to representation and other entitlements given to them,” said Durga Raghunath, co-founder and CEO, Juggernaut.

Zoya Brar, founder and managing director of Core Diagnostics, said gender diversity can be a great tool to get rid of idea stagnation in organisations. She further added that women bring in a lot of fairness and empathy into the workplace, all thanks to their nurturing instincts. She called upon entrepreneurs to create opportunities for women to integrate them into the workspace and parents to encourage innovation and entrepreneurial aspirations in their daughters.

Although only about 6% of venture capitalists are women, Anu Sridharan, co-founder and CEO of NextDrop, said she never faced any discrimination from the investor community. “Investors grill us on the same kind of questions that men get asked. It’s all about the idea, team’s expertise and performance metrics behind VCs’ investment choices, and not gender,” she said.

The panel observed that the real inequality lies in the common perception that entrepreneurship is for men. “Men get a free pass when it comes to kids. Male founders are naturally allowed to commit their life to their startups, stay back late, work 24 hours on their ideas, but not women,” said Raghunath. If entrepreneurs can engage in genuine conversations with their female employees and offer flexible options, they can easily retain a good majority of them, she added.

Communicating with employees during tough times

Since the second half of 2015 venture funding has been drying up and with a renewed focus on unit economics and cost-cutting, several startups have been forced to shut shop. Over 3000 jobs in the startup sector have been slashed till date. In such challenging times, how should startups handle a nervous workforce? That was the moot question at one of the Techcircle Startup 2016 panel discussions titled ‘Nurturing talent in a constrained environment’.

Founders spending time with their employees and connecting with them in an emotional level was most crucial, agreed panellists, many of them from startups who have had to trim their workforce.

“They (employees) would believe you only if you can connect with them,” said Ajay Nair, chief human resources officer, Housing.com. “When you have a change in the business model, try to communicate to people about their role changes. We can be very humane with people even when letting them go.”

He said when Housing was faced with such a situation, the company made an effort to communicate to every employee, both the ones who were asked to leave and those being retained. The aim was to avoid unwanted rumours and treat everyone equal. He claimed the company supported the employees until they found another job.

Amiya Pathak, director, product management, Twitter said there are many things that Indian startups can learn from Silicon Valley based companies, because the latter often foresee the requirement and hire accordingly. Taking about his entrepreneurial experience with ZipDial, which got acquired by Twitter, he said, “The kind of connect we had with each team member helped us in retaining the team even when we couldn’t offer salaries at par with the market standards.” Effective communication was key here. “When the company is changing direction, its import you communicate. Make sure you make the extra bit of efforts even when you are letting someone go,” he advised.

Too large a workforce is often the result of indiscriminate hiring. Excessive hiring happens when companies are flush with funds, pointed out several panellists. When the focus is on areas of specialisation and not on accountability, people tend to go for massive hiring.

Talking about hiring the best talent in spite of funding constraints and retaining it for the long run, Vinay Mishra, co-founder of Homeveda, said hiring talent is tougher than retaining it. “While retention is a culture issue, hiring new people is the real challenge,” he said.