Finance Minister Arun Jaitley on Wednesday significantly raised the budget allocation for healthcare expenditure for FY2017-18 while offering reasons to cheer for the medical devices and pharmaceuticals sector. However, the industry at large has been disappointed by the Union Budget.

The government increased the budget allocation by a whopping 24% for the healthcare sector to Rs 48,853 crore against the slightly upwardly revised estimate for the last financial year at Rs 39,688 crore. This is perhaps the biggest hike for the sector in a country where public health expenditure is currently at just about 1% of GDP. But long-standing demands like according infrastructure status to the sector did not elicit any response in the Union Budget.

Amit Varma, managing partner at healthcare-focused fund Quadria Capital, said he is disappointed that the sector has not been given its dues.

However, there were positives with the finance minister proposing reforms in the medical devices sector and the Drugs and Cosmetics Act and revamping the foreign direct investment rules that are expected to benefit the pharmaceuticals sector.

The Union Budget has proposed new rules for regulating medical devices in a country where imports still form 75-80% of the total consumption of medical devices, equipment and consumables.

The rules for the sector will be internationally harmonised and this will reduce the cost of such devices, the finance minister said.

"For local indigenous medical technology to blossom, it requires more support and further decrease in taxation," he said. 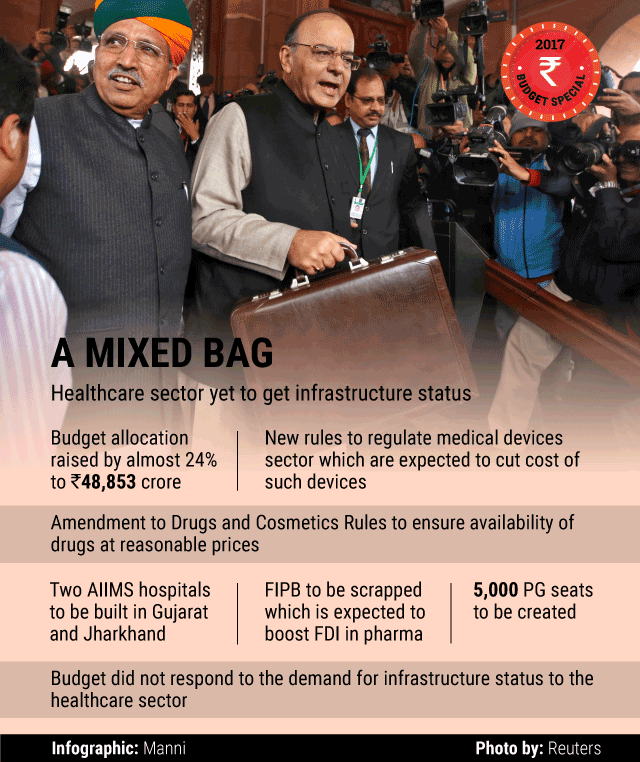 The medical devices sector has been watching out for the possible creation of a separate ministry, which was hinted at by the government in 2015. The policy will delink the sector from the pharmaceuticals industry and will likely pave the way for greater investment and R&D in the segment. It remains to be seen whether this will form part of the government's rules.

“Draft medical devices rules have been in vogue for quite some time. It is encouraging to see that the government will seek to introduce some regulations in the coming year” said Anand Mehta, partner at law firm Khaitan & Co.

Another partner at Khaitan, Ajay Bhargava noted that the finance minister spoke about bringing medical devices into the price control net.

Finance Minister Arun Jaitley said a roadmap for phasing out Foreign Investment Promotion Board (FIPB) will be brought in FY2017-18 and promised further liberalisation in FDI policy. This is expected to boost investments in the pharmaceuticals sector which thrives on strategic deals.

Quadria's Varma said getting rid of FIPB will certainly help the pharma industry.

“The budget speech spoke of increased FDI over the last year. Recent changes towards liberalising FDI in the pharma sector will only lead to this being increased further in the coming year," said Rajat Mukherjee, partner, Khaitan & Co.

Though the abolition of FIPB will help reduce deal timelines, we will need to see how other restrictions in the FDI policy would now be implemented, he said.

The Budget has also proposed to amend the Drugs and Cosmetics Rules to ensure availability of drugs at reasonable prices and promote use of generic medicines.

"We welcome the government’s move for amending the drug rules to allow reasonable medicines reaching out to masses in a better way. The amendments in Drugs and Cosmetics Act will improve the way pharma sectors is serving the people in the country," said Pradeep Dadha, CEO and founder of online pharmacy firm Netmeds.com.

Another good news, Varma said, is the Budget has expressed its commitment to public infrastructure with the announcement of two All India Institute Of Medical Sciences (AIIMS) hospitals. The hospitals will be opened in Gujarat and Jharkhand.

The Budget has also proposed to take steps to create 5,000 more post graduate seats per annum to ensure adequate availability of specialist doctors to strengthen secondary and tertiary levels of healthcare. For this, the government will start courses in big district hospitals, strengthen PG teaching in select ESI and Municipal Corporation Hospitals and encourage private hospitals, it said.

The government is also  committed to take steps for structural transformation of the regulatory framework for medical education and practice in India, the Budget said.