The initial public offering of Central Depository Services Ltd (CDSL) received bids for 170 times the number of shares on sale, making it the most attractive IPO in nearly 12 years.

The public offering of 24.83 million shares – excluding the anchor investors’ portion – got bids for nearly 52 million shares, stock-exchange data showed at the end of bidding on Wednesday. This translates into bids worth Rs 62,653 crore ($9.7 billion).

The IPO of Mumbai-based CDSL, part-owned by stock exchange operator BSE Ltd, is the most successful offering in India since Gurgaon-based FCS Software’s Rs 17.5 crore share sale in August 2005.

Data showed also that institutional buyers’ category in the CDSL IPO was covered nearly 150 times on the final day while the portion set aside for non-institutional investors, such as corporate houses and wealthy individuals, was covered 563 times. The retail investors’ portion was subscribed about 22 times.

CDSL’s IPO, the first by a securities depository firm in India, comprised only an offer for sale by its shareholders, including BSE, State Bank of India, Bank of Baroda and Calcutta Stock Exchange. The shareholders sold a total of 33.65% stake in CDSL, as per the draft prospectus. BSE alone sold 26%.

The selling shareholders will raise a total of Rs 523.99 crore at the upper end of the Rs 145-149 price band. The securities depository firm had sought a valuation of up to Rs 1,557 crore through the IPO. 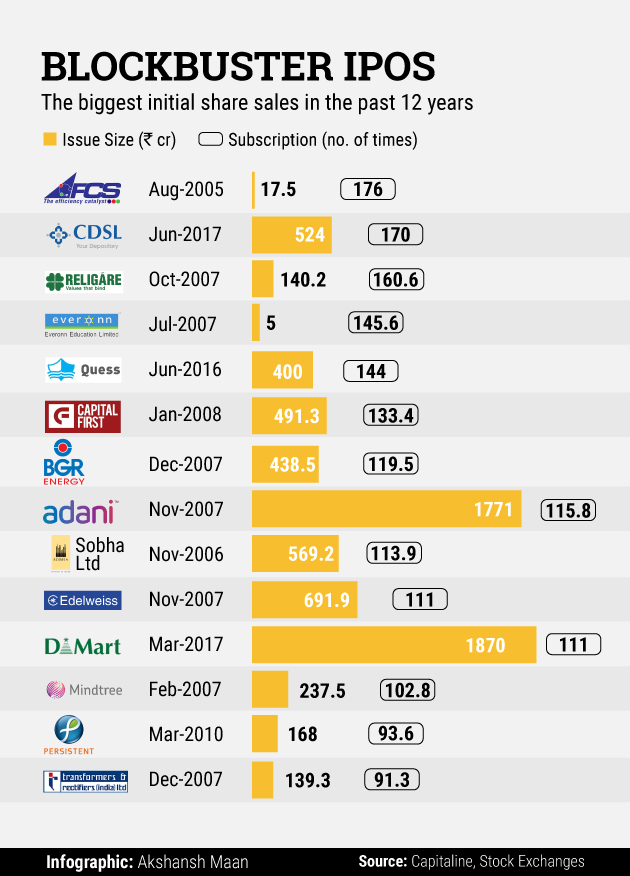 Ahead of the IPO, the company sold shares worth Rs 154.06 crore to anchor investors including Abu Dhabi Investment Authority, Goldman Sachs and Indian asset managers such as DSP BlackRock and SBI Mutual Fund.

CDSL had planned to float the IPO by the end of March but couldn’t do so because its parent, BSE, didn’t meet certain regulatory norms. The IPO came back on track after the BSE assured it would comply with all requisite norms on the shareholding limit and maximum board seats in CDSL.

As per these norms, BSE was required to reduce its stake in CDSL to 24% by 2015. This deadline was extended to March this year and then till June. BSE holds a 50% stake in CDSL.

BSE, which went public in February through a Rs 1,243-crore IPO, had requested SEBI to increase the investment ceiling for stock exchanges in depositories and allow it to hold four seats on the depository’s board, two more than the norms stipulated. SEBI had rejected these requests.

CDSL facilitates deposits of securities by opening an account. Securities such as shares, debentures and bonds of investors are held in electronic form (dematerialised form) at the depository. It has about 1.6 crore investor accounts.

The company reported a consolidated net profit of Rs 85.78 crore for the financial year 2017 on revenues (operations) of Rs 146 crore, according to the red herring prospectus (RHP). For 2015-16, its revenue from operations stood at Rs 122.85 crore compared with Rs 105.28 crore in the previous year.