Edtech decacorn BYJU’s will spend $750 million to buy Mumbai based Toppr and Singapore based Great Learning. The two deals take the Bengaluru based company’s acquisitions tally this year alone to seven.

Mumbai based Toppr, a schools focused test preparation platform, has been acquired for $150 million, a person aware of the transaction told TechCircle. Separately, BYJU’s said in a statement on Monday that it had acquired upskilling platform Great Learning for $600 million.

Both transactions involve a combination of cash and stock, regulatory filings showed.

Email queries to BYJU’s and Toppr went unanswered at the time of publishing of this article.

The Great Learning and Toppr acquisition announcements come a week after the edtech major snapped up US based Epic for $500 million.

Earlier, on July 13, TechCircle reported that BYJU’s had completed the acquisitions of Toppr and Gradeup, a test preparation platform for competitive examinations. 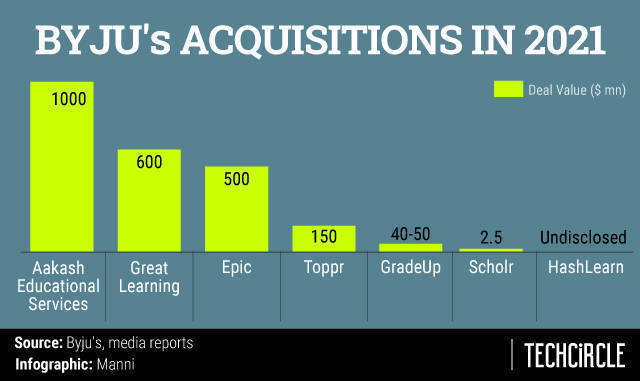 Last month, Byju’s became the most valued startup in India after the edtech decacorn raised nearly $340 million (Rs 2,493 crore) in its latest round of equity funding led by Abu Dhabi's state entity ADQ, formerly known as Abu Dhabi Developmental Holding Company. The round valued the company at $16.5 billion.

Apart from paying out $600 million to buy Great Learning, BYJU’s has also earmarked a further $400 million in investment towards the professional skilling and life-long learning segment, taking the total commitment for this vertical to $1 billion.

The acquisition of the Singapore based company is second largest done by BYJU’s after offline test preparation network Aakash Institute, which it acquired for close to $1 billion in April this year.

With the acquisition of Great Learning, Byju’s enters the upskilling and reskilling segment. It will now be in direct competition with heavily funded players such as upGrad and Blackstone backed Simplilearn.

Great Learning will continue to operate as an independent unit under under the leadership of its founder and CEO Mohan Lakhamraju and co-founders Hari Nair and Arjun Nair, BYJU’s said in a statement on Monday.

“Great Learning is a globally recognised and reputed professional education company and this partnership expands our reach into this new segment. With our combined strength, we aim to become a global market leader in this segment,” Byju Raveendran, founder and CEO of BYJU’s, said.

Founded in 2013, Great Learning, a boot-strapped company, claims to have delivered over 60 million hours of learning to 1.5 million learners from over 170 countries. It leverages a curated network of 2800-plus mentors and more than 500 corporate partners for their upskilling and talent needs.

Toppr last raised $46.7 million in a growth funding round led by Foundation Holdings in 2020.

With the acquisition of Toppr, Byju’s inches a step closer towards consolidation in the K-12 learning segment which has witnessed a spike in demand due to the pandemic. In this space, Byju’s competes with SoftBank Group Corp backed Unacademy and Tiger Global Management backed Vedantu.

HROne secures Series A funding from Insitor and Prudent

Why startups are leaving Esop expenses out of Ebitda calculations

Chalo seeks to raise fresh funding at over 2x valuation