By convention, it should have been an interim budget, a run-of-the-mill ‘vote-on-account’ less than three months before the country goes to vote to elect a new government.

But on Friday, in a bid to woo voters, the Narendra Modi government delivered what will perhaps go down as the most populist, please-all budget since it came to office in May 2014.

The middle class, which makes up the core vote bank for Modi’s Bharatiya Janata Party (BJP), was given tax rebates that the government estimates will benefit 30 million people. About 100 million people employed in the country’s unorganised sector have been brought under the ambit of a pension scheme.

The biggest announcement, however, related to the farm sector. As many as 120 million farming families—or an estimated 600 million Indians, a little under half the country’s population—walked away with some form of universal basic income for the first time ever, a cash handout that future governments may find tough to roll back.

The pension plan and the farmer income scheme add to the universal healthcare insurance scheme that the Modi government had announced in the budget last year. Together, these schemes could act as a social security cover for the most vulnerable sections of India’s population. 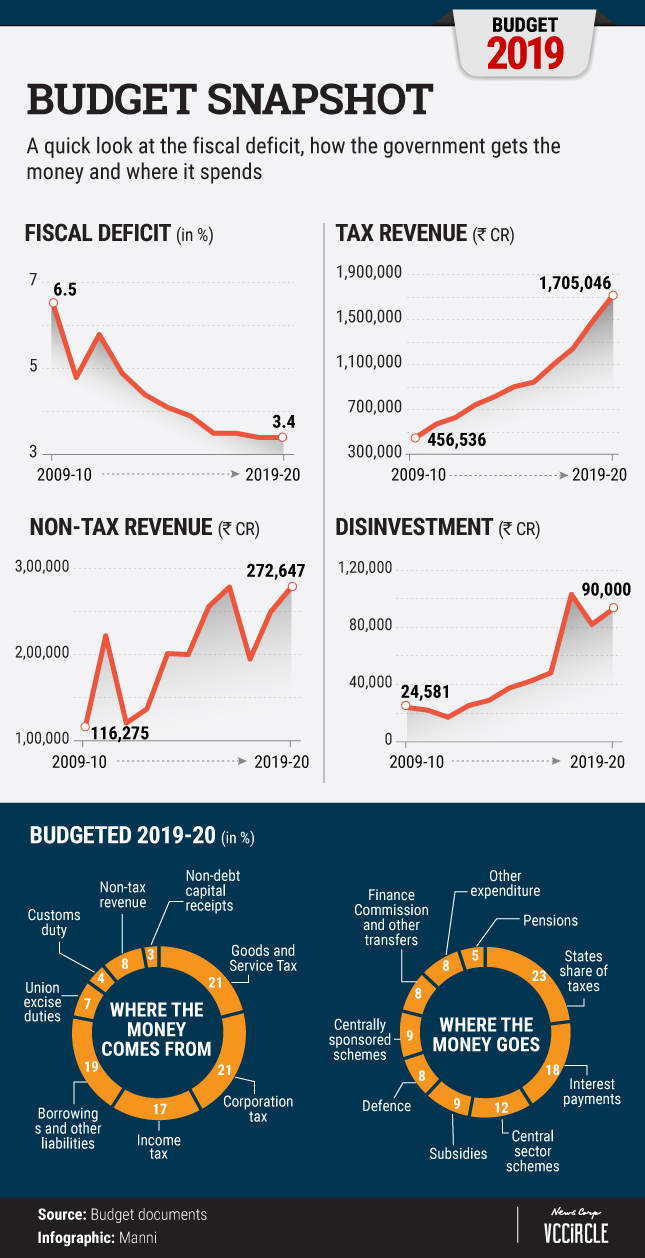 Small farming families, which own two hectares of land or less, are set to receive a direct cash handout of Rs 6,000 a year, in three equal installments, under the so-called Pradhan Mantri Kisan Samman Nidhi Scheme, acting finance minister Piyush Goyal said while tabling the interim budget for 2019-20 on Friday.

Goyal, who stood in for his ailing colleague Arun Jaitley, said that the cash handouts would cost the government Rs 75,000 crore annually. In fact, Goyal blamed the government’s inability to stick to its fiscal deficit target of 3.3 % of gross domestic product on the extra Rs 20,000 crore he set aside for the current financial year for the scheme that will be implemented retroactively, from December 2018.

The minister said the government could have maintained the fiscal deficit at 3.3% and even lowered it further, but chose to ease the target considering the need for the new income scheme to the farmers.

Goyal also announced a pension scheme for unorganised sector workers with monthly income of up to Rs 15,000. The Pradhan Mantri Shram-Yogi Maandhan scheme aims to provide them an assured monthly pension of Rs 3,000 from the age of 60 years, Goyal said. This scheme will also be implemented from the current year, he said, and allocated Rs 500 crore.

Targeting middle-class voters, Goyal proposed a tax rebate for those whose income after deductions is Rs 5 lakh. He said individual taxpayers earning up to Rs 5 lakh will no longer have to pay any tax.

To be sure though, not all taxpayers will benefit, as this is not an increase in the minimum exemption limit, which stays at Rs 2.5 lakh. Taxpayers with total income less than Rs 5 lakh will be offered the rebate of zero tax by amending section 87A of the Income-Tax Act, according to the Finance Bill 2019-20.

Archit Gupta, founder and CEO of ClearTax, said that those with income exceeding Rs 5 lakh will pay tax on income between Rs 2.5 lakh and Rs 5 lakh at the rate of 5% as before.

It, however, does mean that even a person earning up to Rs 9.25 lakh, who avails all the maximum permissible exemptions under the Income-Tax Act, could benefit from this rebate.

In other measures aimed at benefiting individual taxpayers, Goyal said standard deduction on personal income tax for salaried people has been increased to Rs 50,000 from Rs 40,000. Moreover, interest on bank savings accounts will be tax-free up to Rs 40,000 compared with Rs 10,000 currently.

Paresh Parekh, partner and leader of consumer tax sector at EY India, said the budget is “hugely positive” for the consumer sector. “Higher disposable income, farmers’ package and housing proposals are potential game changers for the entire economy,” he said.

Back-of-the-envelope calculations show that the cash handouts and tax rebates could translate into an additional disposable income of the order of Rs 1 lakh crore, a bulk of which will likely go towards consumer spending and boost demand.

While corporation tax and the personal income tax are estimated to increase, the Goods and Services Tax collections are short of previous estimates. The government now estimates GST collections for this year to be 6.44 trillion, lower than the Rs 7.44 trillion expected earlier.

Abhishek A Rastogi, partner at law firm Khaitan & Co, said the government had kept everyone guessing as to whether an interim or a full-fledged budget will be presented. “It turns out that the Budget 2019 was a full-fledged budget with major policy decisions being announced including pension scheme for unorganised sector and direct subsidy to small farmers,” he said.

Rastogi said that, as expected and considering the prominence of the GST Council, no major announcements were made regarding the GST. “With respect to customs, duty on certain capital goods is being withdrawn. This will give a major fillip to the Make-in-India vision of the government,” he said.

If Prime Minister Modi had asked of his finance ministry mandarins to frame a budget he could sell to the masses, they seem to have done a fine job. Now it remains to be seen if India’s nearly 700 million voters will buy into his dream and vote his government back to power in three months’ time.