Are there emerging frontiers for venture capital?

It is interesting to note that amongst the top 10 start ups worldwide, 2 are in the e-commerce business (Airbnb and Flipkart) and seven (Uber, Airbnb, Snapchat, Flipkart, Didi Kuaidi, Pinterest and Dropbox) are part of the digital industry.

Based on this information, the key question that comes to mind is why are the most valuable start up businesses in the digital space?  Why is innovation in other industries like healthcare, agriculture, automotive, food etc. not keeping pace with IT? And why do venture capitalists (including in India) continue to invest most of their money in IT and related businesses? 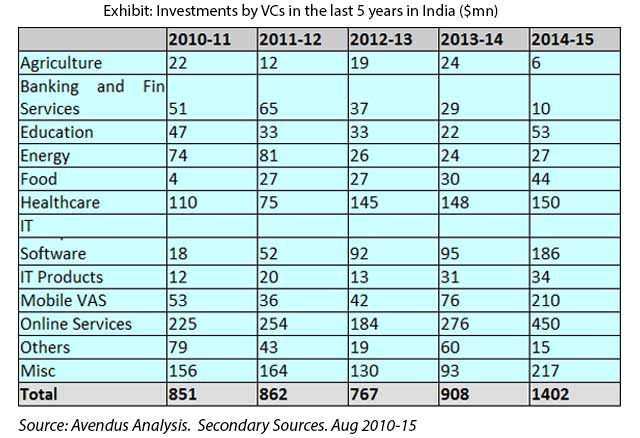 Let us attempt to answer some of these questions:

To summarise, innovation and its propagation is a function of entrepreneurship, talent, availability of capital, regulatory framework and taxation, local market and its size etc.

India with its 1.25 bn population, favourable demographics, large pool of educated work force which include engineers and doctors, can do much more than innovate in the digital and e-commerce industries only. For instance, Indians love food and a large number of startups have emerged in the food industry.  Fassos, Tinyowl, Fresh, Hola Chef, Between Breads etc are a few ideas that are changing the face of the Indian food industry.  All of these businesses are funded by investors.

Another example is the healthcare industry, which has attracted the second highest VC capital after IT. India houses one of the most cost effective and competitive healthcare companies in the world.  Indian generics manufacturers and hospital chains provide tough competition to their global counterparts.  Startups like Wrig Nanosystems, MapMyGenome, Smile Merchants, AddressHealth etc. are addressing daily health needs and could revolutionise the healthcare industry in years to come in the same fashion as that of the digital / e-commerce today.

The Government is moving ahead with its promise to electrify all villages and provide low cost housing to every Indian by 2022. This will open a new opportunity for businesses in power generation & transmission and construction.  Distributed solar power opportunity in India is already enticing investors like Softbank and Foxconn.

As India grows, interesting opportunities will emerge across many sectors. It took the emergence of a ‘Flipkart’ and ‘Ola’ for the e-commerce and taxi services industries to take off.  Many years back, Bharti had put India on the world mobile market, in a similar fashion.

Will the next opportunity be food, defence, healthcare, power or anything else?  I don’t have the answer.  We will ask the investor who identifies the next big one a few years later.  And he will most likely be having the last laugh.