Anil Ambani pumping $212M to up holding in RCom 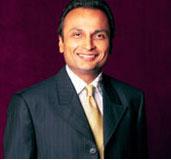 This is part of the previous announcement in June where the firm had said it is raising $1 billion through a mix of institutional placement and preferential allotment to the promoter.

Promoter group company, Telecom Infrastructure Finance Private Limited is picking 86.6 million warrants at Rs 150 each. Reliance Group has already coughed up half of the amount or Rs 650 crore ($106 million) and the remaining 50 per cent will be paid upon the conversion of warrants into equity on or before March 31, 2015.

RCom said it will utilise the proceeds from the preferential issue to bring down its debt.

Upon conversion of warrants into equity Reliance Group holding will move from 58.39 per cent to 69.31 per cent.

The promoter holding had shrunk last month from 67.8 per cent after an institutional placement which bagged around $800 million in an oversubscribed issue.

Shares of Reliance Communications were trading at Rs 130.15 per share, up 0.15 per cent on the Bombay Stock Exchange in a flat Mumbai market on Thursday.