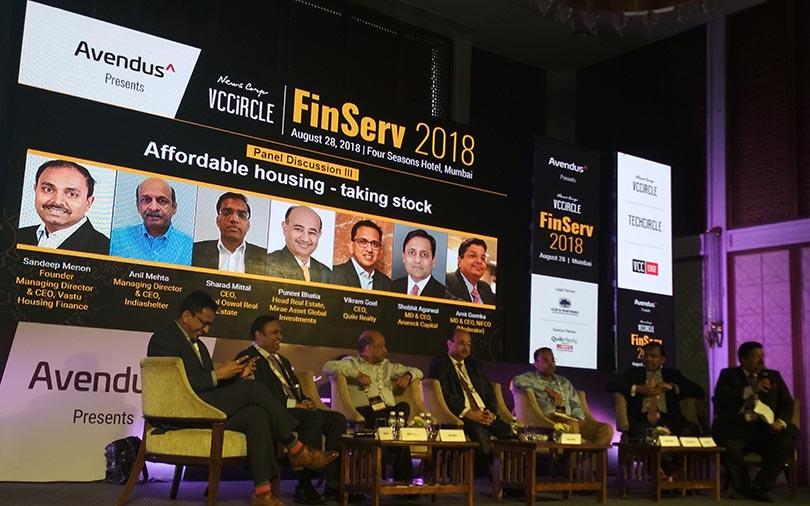 Panellists at the session ‘Affordable Housing – Taking Stock’ during FinServ 2018 on Tuesday.

The government’s affordable housing initiative has proven to be uneconomical and has failed to gain traction owing to various issues faced by developers, besides other bottlenecks such as a lack of quality products, said panellists at News Corp VCCircle’s FinServ 2018 summit.

Industry executives gathered at Four Seasons Hotel in Mumbai on Tuesday for the 10th edition of the event, where stakeholders discussed the opportunities and challenges of the financial services sector.

The panellists said that while there is a demand for affordable housing, much of the action remains centred around ‘economic housing’ aimed at the lower income group (LIG) population who cannot afford houses in big urban cities.

At the same time, developers lack scale and size, often leading to higher cost of production and thereby making it unviable for them to enter the space.

Quikr Realty’s Goel said there were several queries by potential home buyers, but given that these came from the outskirts of main cities, converting them into actual sales was time consuming.

“There are 20 million homes still required. So there is awareness about the importance of affordable housing. However, margins are thin for developers and investors to see any substantial returns. Plus there are other issues like lack of land demarcation for affordable housing. Also, the developers need to bring in the right products to the marketplace,” Goel said.

The Narendra Modi-led NDA government had launched the ‘Housing for all’ scheme, Pradhan Mantri Awas Yojana (PMAY), in June 2015, promising to build permanent housing for weaker sections of the society by 2022.

Anarock’s Agarwal said that there is capital ready to be deployed into affordable housing, but it is still not as much as desired by large developers because of on-the-ground issues such as taxation or unviable business models.

“We are in a contradictory situation, where we are looking for high margins in a low-cost product,” Agarwal said, adding that many bilateral and multilateral institutions have invested into funds and platforms, but they need to see track record and credibility among developers.

“You need more government support. Capacity building is an issue. The space needs to be led by corporates who have scale and size. So the whole concept of affordable housing is not a myth, it is under-served and the industry needs to deliver projects that will meet the right kind of demand,” Agarwal said.

So far under PMAY, the government has disbursed more than Rs 32,000 crore across 4 million beneficiaries. More than $1 trillion in capital is required to put a roof over India’s massive population that still lacks proper housing.

Bhatia said that global investors are still seeking returns from India as a developing nation and would like to see more profitability coming to affordable housing for proof of concept before investors start deploying capital in a big way.

“Many global investors have formed funds and platforms but there is much to be done in terms of capital and development capabilities before serious money starts coming the way it has come in to commercial real estate. The question is how can you make affordable housing more attractive? Also what investors are looking for is track record,” Bhatia said.

The panellists also said that affordable housing cannot be seen growing only on the back of government schemes, as subsidies cannot last forever.